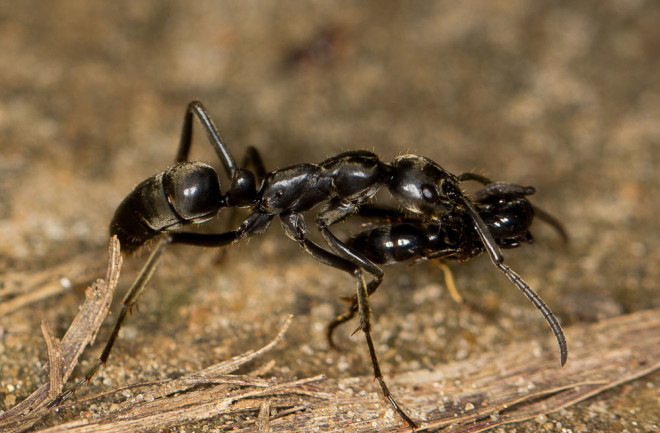 An African ant, Megaponera analis, carries an injured soldier from the battlefield. (Credit: Erik Frank) Ants that hunt termites can risk getting grievously injured in battle, but that doesn't mean its the end of the line. In a newly published study, scientists observed ant medics caring for their wounded comrades, which may be the first scientifically documented example of such medical care in the animal kingdom outside humanity. The African ant Megaponera analis specializes in hunting termites. After scouts of this ant species find termite feeding sites, the scouts lead columns of 200 to 600 fighters back to capture and kill termite prey. "The colony only has between 10 to 20 scouts at a time looking for food, and these scouts make all the important decisions about where to forage and how large the army should be that goes out," said study lead author Erik Frank, a behavioral ecologist who carried out this research at the Julius Maximilian University of Würzburg in Germany. "Thus 1 percent of the colony is responsible for the success of the other 99 percent."

Ant Medics to the Rescue

These raids are dangerous for the invaders — termite soldiers often bite the limbs off ants. After battles, Frank discovered that some ants carried injured nestmates back home. Ants that lost extremities during battle make up roughly 5 percent of their colonies, but could run about as fast as healthy ants, which suggests that rescuing injured ants benefits their colonies. To find out what exactly happened to injured ants after they returned home, Frank and his colleagues investigated 16 ant colonies in the savannah woodlands of Comoé National Park in Côte d'Ivoire. They also experimented with injured ants in the field as well as in six colonies that were excavated and taken to a lab. The scientists found that inside nests, maimed ants received aid from comrades that cleaned their open wounds with their mouthparts.

An ant applies treatment to an injured comrade. (Credit: Erik Frank) "It's the first time this type of behavior has been described in insects — treating the wound of another individual," Frank said. "There are also no proper examples, to my knowledge, of this type of behavior in the animal kingdom in general. There are a couple of anecdotal observations of wound treatment in primates — mother and child — but no real scientific studies that have looked at it in depth." This grooming likely removed dirt from the injuries and may have also applied antimicrobial substances to the wounds. "The first time I saw the treatment behavior, I did not believe it — we first filmed it with relatively bad cameras in the nest, and we could only see that the head of another nestmate was touching the leg," Frank said. "It wasn't until I had better-resolution videos that I was sure this was an intentional treatment of a wound." This grooming from ant medics reduced the mortality of treated ants by 70 percent. Lack of treatment increased mortality by up to 80 percent within 24 hours, most likely due to infections, the researchers said. The scientists detailed their findings online Feb. 14 in the journal Proceedings of the Royal Society B.

Frank and his colleagues also found the ants performed a kind of triage. Lightly injured ants behaved in an injured manner near nestmates to attract help — moving slower and stumbling when near other ants, moving faster when alone — and cooperatively let themselves get carried by others. On the other hand, heavily injured ants that lost five or more limbs did not call attention to themselves, and actually flailed about uncooperatively during rescue attempts, and so were not saved or treated. These findings suggest that these ants engage in primitive triage behavior that helps lightly injured ants get treatment while heavily injured ants are passed over as beyond help. "In humans, in cases where a triage system is necessary — that is, too many injured, due to a catastrophe — the decision who will receive help is made by the doctor, a top-down regulated system; in these ants, it's exactly the opposite," says Frank. He continued:

"I am always amazed and in awe of the behavioral complexities ant societies are able to show without any type of central organization or consciousness. The individual ant does not know why it treats the injured (to prevent an infection), or why the heavily injured ant does not call for help (because it would not be of use in the future). They simply do it because they follow very simple rules, be it chemical cues or otherwise, and because evolution selected for these behaviors since they increased overall fitness. That is what amazes me the most — how far evolution can lead to very specialized and sophisticated behaviors."

Seeing such a sophisticated medical system in ants "helps us reflect on our own rescue and medical systems," Frank said. Further research on this and other species may help shed light on the evolution of rescue behavior and on the behavior of social insects. "Other insects that live solitary lives have to be able to cope with injuries by themselves and might need to invest more energy into their immune system to survive," Frank said. "Social insects, on the other hand, can afford to reduce their individual investment in their immune system, thus saving energy, and compensate for it through this kind of social treatment."