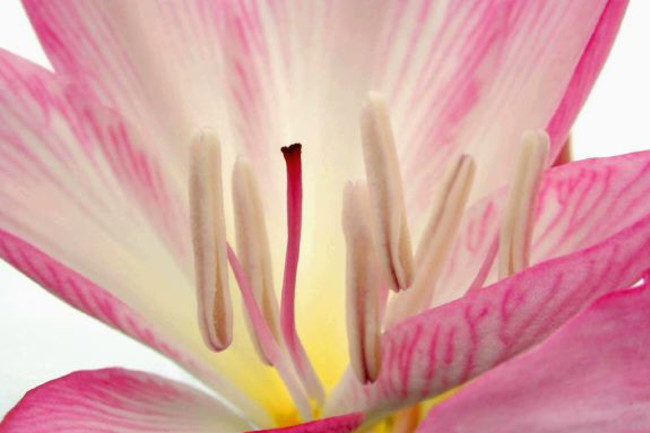 “Abominable” is not the sort of word that most people may associate with flowers, but for Darwin, it was a perfect fit. He saw life on Earth today as the result of millions of years of victories and defeats in the evolutionary arena. Flowering plants, by that reasoning, were among the greatest champions of all. There are some 250,000 known species of flowering plants, and the total is probably double that. The closest living relatives of flowering plants (pine trees, firs, gingkos, and the like—collectively known as gymnosperms) make up a grand total of just over 800. These numbers are all the more remarkable when you consider that flowering plants emerged around 140 million years ago, and gymnosperms had already been on Earth since at least 360 million years ago. In over twice the time, gymnosperms have produced less than 1% of the diversity found in flowering plants. What was the secret of flowers? Darwin wrote to his friend the botanist Joseph Hooker that this question was “an abominable mystery.” Darwin assumed that there must be one secret to be found, and since then most botanists have agreed. Perhaps it was their ability to be pollinated by bees and other insects, or perhaps the way animals that ate their fruit could disperse seeds in their droppings. In order to test hypotheses like these, scientists need to figure out how all the species in question are related, to see exactly when the explosion of diversity took place over the course of their evolution. But when you’re talking about 250,000 species, that’s no easy task. In recent years, different teams of scientists have compared the genes of different species of flowering plants. Researchers from Florida and England developed mathematical methods to combine 46 of these trees into a “supertree.” While this tree does not actually have a twig for every species of flower, its 379 branches include every family of species. This is only a step towards the full tree of flowering plants, but it’s a huge one—just ten years ago scientists thought such a goal was impossible to meet. The researchers were also able to plot the tree against time, estimating the dates at which major new groups of flowers evolved. The scientists present their tree today in the Proceedings of the National Academy of Sciences. Supertree now in hand, the scientists then tried to solve Darwin’s abominable mystery. Did flowers explode in diversity at one particular point in their history? Or was there one particular strategy for survival used by some flowers that made them more diverse than other flowers? None of the above, it appears. Early flowers did undergo a small burst of diversity, but there have been many bursts since then, and they don’t seem to follow any one rule. There is no one secret to the success of flowers, but perhaps many small ones waiting to be discovered. It’s possible for example that in some cases flowering plants thrived particularly well as the planet has gradually cooled. (Gymnosperms may, by constrast, be locked into a biology better suited to the much warmer climates 200 million years ago.) Darwin’s abominable mystery has split into many small mysteries, like a pool of mercury breaking into an elusive flock of droplets. But when scientists finally create a species-level tree of flowering plants (an achievement that may take decades), they may finally pinpoint some of the solutions.