Flies drink alcohol to medicate themselves against wasp infections 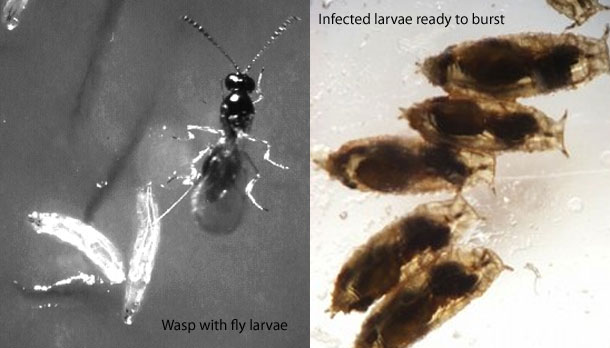 Some people drink alcohol to drown their sorrows. So does the fruit fly Drosophila melanogaster, but its sorrows aren’t teary rejections or lost jobs. It drinks to kill wasps that have hatched inside its body, and would otherwise eat it alive. It uses alcohol as a cure for body-snatchers. D.melanogaster lives in a boozy world. It eats yeasts that grow on rotting fruit, which can contain up to 6 per cent alcohol. Being constantly drunk isn’t a good idea for a wild animal, and the flies have evolved a certain degree of resistance to alcohol. But Neil Milan from Emory University has found that alcohol isn’t just something that the insect tolerates. It’s also fly medicine. Insects the world over are plagued by parasitic wasps. The wasps lay eggs in or on the bodies of other insects, turning them into living larders for their developing grubs. The grubs eat their hosts from the inside-out and eventually burst out of their dead or dying husks. It’s a grisly fate, but D.melanogaster can do something about it. Milan raised some fly larvae on food that contained 6 per cent alcohol, and offered them to the wasp Leptopilina heterotoma. This species is a generalist that targets a wide variety of flies. He found that the wasps laid three times more eggs on teetotal flies than on boozy ones. Maybe they were sickened by the fumes. Perhaps they detected a hostile environment for their grubs. Either way, among alcohol, the flies were less likely to become a wasp buffet. Even if the wasps manage to lay their eggs, an alcoholic fly larva proves to be a bad place to grow up. Twice as many of the wasp grubs die if their hosts chow down on alcoholic food. Even those that survive fare badly. When Milan cut them out of the flies, he found that their internal organs were deformed, and they could barely move. Normally, flies try to deal with wasp infections by imprisoning the unwanted grubs in special cells. But those that get a drink don’t bother. They don’t need a special defence – the alcohol does the job for them. And the flies seem to know this. Milan found that infected larvae will actively medicate themselves. If given a choice between alcoholic and non-alcoholic food, larvae with wasps inside them will crawl towards the intoxicating meal. And as a result, they’re more likely to survive their ordeal. But these defences aren’t unbreakable. A different but closely related wasp – Leptopilina boulardi – only pursues D.melanogaster and it has evolved resistance to its target’s defences. This specialist can take more alcohol than its generalist relative L.heterotoma. It’s more willing to lay eggs on a fly that eats alcoholic food, and its grubs are better at tolerating an alcoholic environment. This looks like yet another example of an evolutionary arms race, where parasites and hosts are locked in a cycle of ever-escalating counter-measures. Because L.boulardi targets a species that regularly encounters alcohol, it has evolved ways of coping with this defence. And it’s possible that the larvae know this too. Milan found that infected larvae were more likely to seek out an alcoholic meal if they were infected by L.boulardi (the specialist) than L.heterotoma (the generalist). Alcohol does slightly harm fly larvae, so it’s only worth drinking it if it’ll do more good than damage. If the drink will kill a parasite, that’s a tick in the plus column. If the parasite is resistant, it might be better to stay teetotal and try another defence. (Alternatively, the wasp might be manipulating the fly away from a potentially life-saving medicine.) The flies are far from the only animals to medicate themselves. Humans obviously do it. Chimps with worm infections in their guts will dose themselves up with the pith of the Veronia plant. Rainforest animals from tapirs to macaws will lick clay deposits to neutralise the poisonous chemicals in their diet. A few years ago, Michael Singer found that woolly bear caterpillars will actively eat toxic plants if they are infected by parasitic wasps. There are hundreds of such examples, but Milan may have found the first one of animals using alcohol to control an infectious disease or a internal parasite. Whether other species, including ourselves, could do the same is currently anyone’s guess. Certainly, this guy might have found a stiff drink to be quite useful. More: For a very different and delightful take on this study, see Rob Dunn’s postReference: Milan, Kacsoh & Schlenke. 2011. Alcohol Consumption as Self-Medication against Blood-Borne Parasites in the Fruit Fly. Current Biology http://dx.doi.org/10.1016/j.cub.2012.01.045More on parasitic wasps and defences against them: