Flatworm Travels to Space With One Head, Comes Back With Two 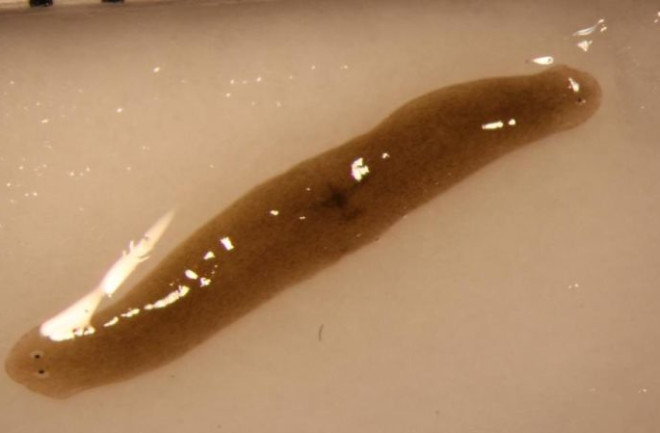 Researchers have been sending animals to space for decades, and the growing roster includes everything from dogs and monkeys to scorpions and jellyfish. But a more recent animal space traveler returned to Earth with something never before seen: an extra head.

The newly bi-cranial creature is a flatworm of the species Dugesia japonica, one of 15 flown above the International Space Station for five weeks by Tufts University researchers. The flatworms were cut in half before being launched to study their unique regenerative abilities. Severing a flatworm usually just results in two identical flatworms, but something appears to have gone awry in one individual, who returned with another head where his tail should have been.

This behavior has been observed before in the species, but it’s exceedingly rare — the Tufts researchers say they’ve never seen it happen before, even after 18 years of working with a colony that now contains over 15,000 flatworms. Even more intriguing, the mutant flatworm kept on making two-headed copies of itself as it further divided, indicating that it wasn’t a freak mutation but a true change in the invertebrates’ physiological makeup.

The 14 other flatworms that experienced the unique stresses of outer space experienced fundamental changes as well, although none so noticeable. The researchers observed them for 20 months after their return and found changes in their behavior when exposed to light and in the content of their microbiomes as compared to control flatworms kept on Earth.

Growing in Space is Weird

In a paper published Tuesday in the journal Regeneration, the researchers propose that the absence of both gravitational and magnetic fields in space could have something to do with the dramatic transformation. Previous research into flatworms has indicated that Earth’s magnetic field influences how the basic structure of their cells grows, and the microgravity aboard the ISS could be affecting everything from gene expression to how ion channels within their bodies communicate. These effects likely extend beyond flatworms as well, meaning that this kind of research is highly informative for future human missions.

We already know that astronauts experience significant physical changes when in space: bones and muscles atrophy, eyesight can falter, blood thins and the sense of taste is diminished. Long-term issues could include vision impairment, heart disease and more, although further study is still needed. Ongoing tests of astronaut Scott Kelly, who spent nearly a year in space, and his twin brother who remained on Earth could reveal additional long-term effects of space travel.

The researchers hope that the flatworm experiment marks only the first of many such research projects. Because they were unable to control for every variable, such as temperature differences during the flight and the stresses of takeoff and landing, they plan to conduct further experiments to pin down the exact mechanisms that affect flatworm physiology in space. In addition, their two-headed worm represents a sample size of just one. To truly scientifically validate their finding, they’ll need to replicate their results.