Flashback Friday: Contrary to what your cats would have you believe, they do recognize your voice. 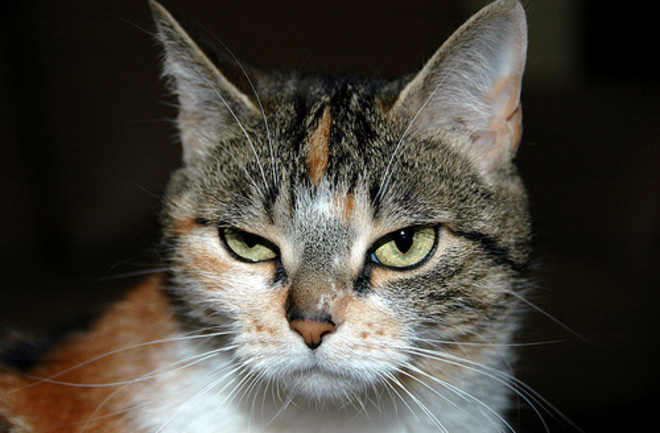 Photo: flickr/Tim DobbelaereThere are those of us who believe that our cats love us, and then there are these scientists, who questioned whether cats can even recognize the sounds of their owners' voices. In this study, they wanted to determine whether a cat was responding specifically to its owner's voice (rather than just any old voice). To do this, they "habituated" the cats to people calling their name by having three strangers say the cat's name. By the third time, the cat's ears barely twitched. Then the owner said the cat's name, and the cat responded, indicating that it could tell the owner's voice was "special". This still doesn't prove that the cats like us more than they would a food-dispensing robot, but hey, it's progress.Vocal recognition of owners by domestic cats (Felis catus). "Domestic cats have had a 10,000-year history of cohabitation with humans and seem to have the ability to communicate with humans. However, this has not been widely examined. We studied 20 domestic cats to investigate whether they could recognize their owners by using voices that called out the subjects' names, with a habituation-dishabituation method. While the owner was out of the cat's sight, we played three different strangers' voices serially, followed by the owner's voice. We recorded the cat's reactions to the voices and categorized them into six behavioral categories. In addition, ten naive raters rated the cats' response magnitudes. The cats responded to human voices not by communicative behavior (vocalization and tail movement), but by orienting behavior (ear movement and head movement). This tendency did not change even when they were called by their owners. Of the 20 cats, 15 demonstrated a lower response magnitude to the third voice than to the first voice. These habituated cats showed a significant rebound in response to the subsequent presentation of their owners' voices. This result indicates that cats are able to use vocal cues alone to distinguish between humans." Related content: Ever wonder what your outdoor cat does all day long? Behold the KittyCam!Introducing…the automatic LOLcat detector!Optimizing the sensory characteristics and acceptance of canned cat food: use of a human taste panel.