From strutting their stuff to committing suicide, some animals will stop at nothing to make sure they get a crack at reproducing. 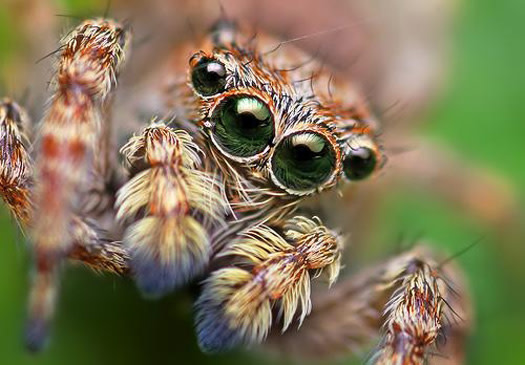 Driven by the forces of sexual selection, male--and, in some instances, female--animals have evolved a dizzying array of mating displays and rituals.

For jumping spiders, mating can be an tricky affair--but not for the reasons you might think. According to a recent study published in Current Biology, jumping spiders communicate during courtship using ultraviolet B (UVB) light, which humans are unable to see. While scientists have long known that certain species use UVA light for communication, this was the first study to demonstrate that some are also able to detect shorter-wavelength UVB light.

The male jumping spiders have specialized scales that glow white and green when exposed to UV light; in female spiders, the palps (front appendages) appeared green under UV light. And the absence of UVB light effectively killed the mood: As soon as either sex was exposed to light without ultraviolet rays (and the showy scales or palps were obscured), the other immediately lost interest in mating. 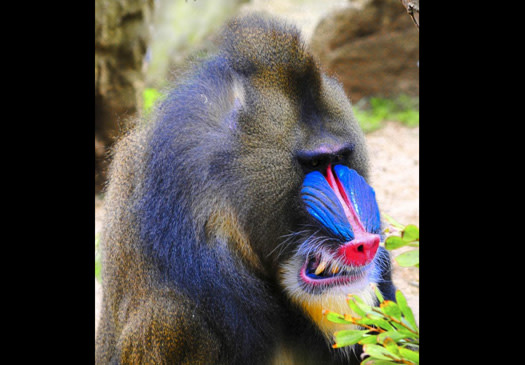 While this male mandrill may look unfriendly, mandrills are social animals that live in large groups in Africa's rainforests. Each pack is led by a dominant, alpha male.

These brightly colored, or "fatted" alpha males--as seen in this picture--are the only ones to sire offspring, and have much higher levels of testosterone than the paler, "non-fatted" males. The red color on the male's face and genitalia also indicate its dominance within the group.

This remarkable coloration becomes more pronounced as the male approaches sexual maturity. By comparison, the female's colors are a drab brown and olive. 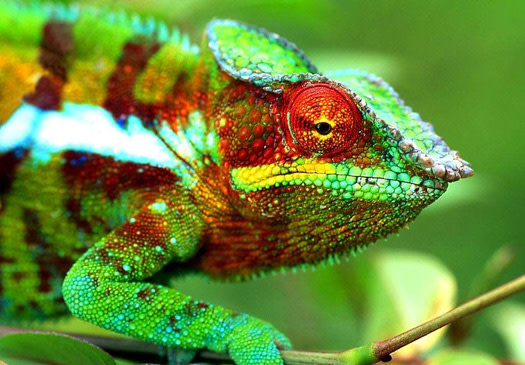 Chameleons were long thought to have developed the ability to change their skin coloration in order to blend in with their environment. But a study published last year in the journal PLoS Biology argues that chameleons evolved this ability to attract mates, scare away rivals, and send other social signals--not for camouflage (at least, not initially).

The presence of chromatophores, or pigment cells, in their skin allows chameleons to change color to pink, red, orange, green, black, and other hues. The color patterns can change in just a few thousandths of a second.

Male chameleons use bright, elaborate visual displays to flaunt their good genes--the more varied and conspicuous the patterns, the more attractive and healthy they appear to potential mates. They use dull grays and browns to signal submission when their courtship attempts are rebuffed or when they are defeated in combat.

In females, a change of color can act as a signal to attract mates or to indicate pregnancy. 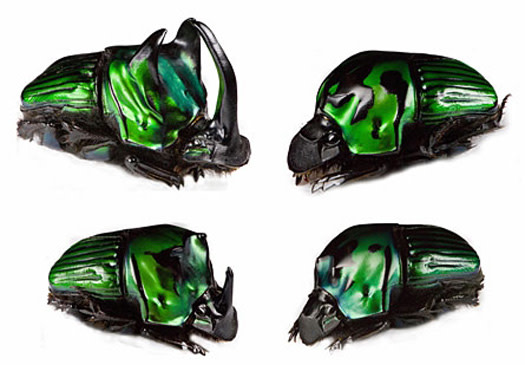 Like stags or elephants, which use antlers and tusks to fight for dominance, male dung beetles use their horns to ward off rivals. Unlike other species, though, the male beetles can assume one of three different forms--a system known as trimorphism--based on the size of their horns: the large-horned alpha (top left), beta (lower left) and hornless gamma (lower right), which resembles the female (top right).

Since larger horns mean more mating opportunities, gammas must resort to stealth, using their meek appearance to avoid combat and sneak into the ranks of waiting females. 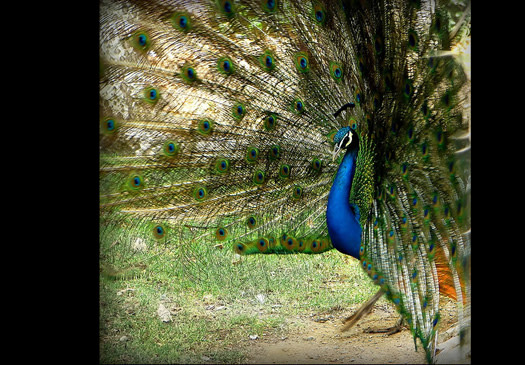 The canonical example of sexual selection, the male peacock (in this image, an Indian blue peacock) is renowned for its iridescent blue-green plumage, elaborate feather train, and iconic "eyes," the colorful markings on its tail feathers. When spread out, those feathers span a diameter that is over 60 percent of the peacock's total body length. The female's appearance, by comparison, is drab: mostly brown, with a bit green iridescence in the neck.

Male "shivering displays," in which a male shows off his train in front of a female to get her attention, and shakes the feathers to produce a distinct rustling noise, play an important role during courtship. 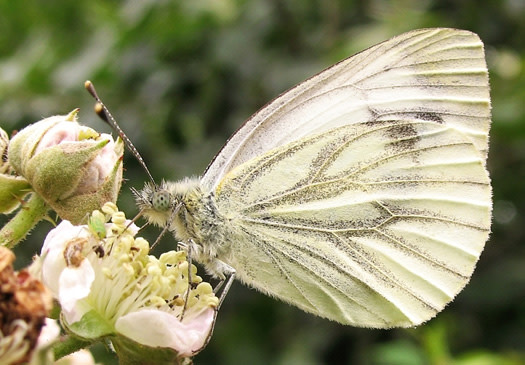 When combat isn't an option, some males resort to far subtler, but no less effective, tactics to dispose of sexual rivals. The male green-veined white butterfly, which is widespread across Europe and Asia, injects methyl salicylate along with its sperm into the female during copulation. The strong scent of this pheromone--also called oil of wintergreen and found consumer goods including Listerine mouthwash and chewing gum--wards off other potential mates, helping to ensure that no other males fertilize the female's eggs.

Because females have several opportunities to mate, male size also becomes a factor. A large male, which produces bigger sperm packets, has a better chance of successful fertilization. Scientists have also found that the larger the ejaculate, the longer a female needs to wait before she can mate with another suitor. 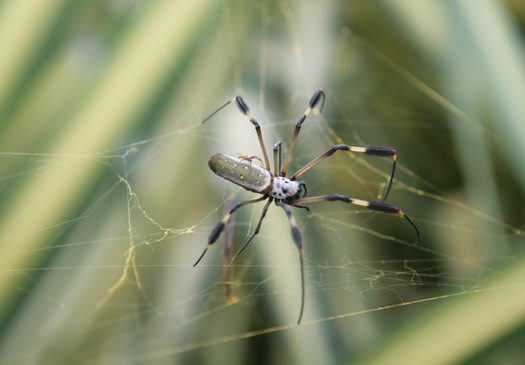 Few animals are as devoted to their mates as the male orb-weaving spider. So-called because of the round shape of their webs, these spiders display a significant degree of sexual dimorphism. As this photo of a (tiny) male and female shows, the males are just a fraction of their mates' size.

Following the onset of copulation, the male willingly sacrifices itself, either through programmed death or by allowing itself to be killed, to feed the female. The male dies immediately after transferring its sperm packet to the female with its palp, a segmented appendage that is used in feeding and copulation; the insertion causes the male's heartbeat to stop almost instantly.

This strategy boosts the male's reproductive success by ensuring paternity. The dead male's palp, which remains in an inflated state and is therefore difficult to remove, acts as a mating plug, preventing rivals from copulating with the female.

Female arthropods of some other species--including, most famously, the praying mantis--also eat their partners in flagrante delicto. 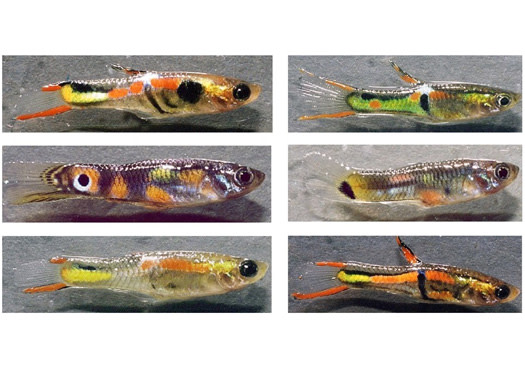 A flashy appearance doesn't always win a female; in fact, it can get you killed. While female guppies are lured by bright colors, predators are more likely to see, and attack, flashier male guppies. Indeed, in environments where predation is particularly intense, natural selection tends to favor dull-looking males--despite the fact that an unremarkable appearance slashes their mating opportunities.

Evolutionary biologists believe that females are attracted by bright colors because they suggest good genes and health. Since flashy males must contend with the constant threat of predation, bright colors may also indicate the presence of other desirable traits--like the ability to dodge fish that want to eat you. 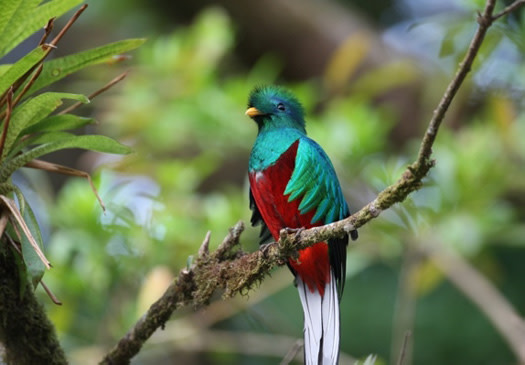 The resplendent quetzal is widely considered one of Central America's most stunning bird species. Venerated by the Aztecs and Mayans, whose rulers wore headdresses made out of its long tail feathers, the bird has a bright green body, a red breast, and green upper tail feathers that conceal its tail; in males, these feathers are longer than its body. During mating season, the male grows a streamer tail, a feather train that can be up to three feet long.

Like other bird species, the female's colors, though similar to the male's, are much more muted.

In addition to its primary role in female attraction, the quetzal's bright plumage is believed to serve as camouflage. Its green feathers, which show little iridescence, allow it to blend in with wet vegetation and hide from predators. 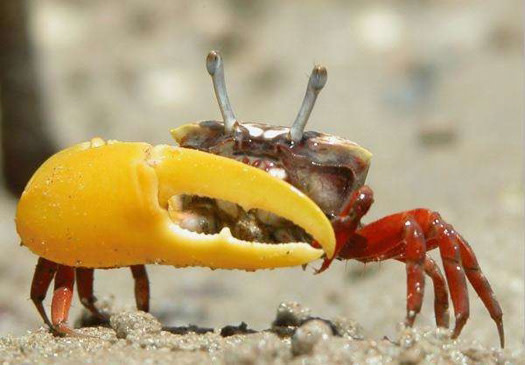 What the male fiddler crabs lack in body size, he more than makes up for in claws. The large claw, or cheliped--which looks like a fiddle when moved in conjunction with the smaller claw--is used for communication, courtship, and combat. The smaller claw is used for eating and building a burrow.

When approached by a potential mate, the male fiddler crab begins to wave its large claw up and down. The higher he can raise it, the better his chances are of mating: larger claws require more effort to lift, so it's a good indication of the male's fitness. If he loses the large claw through injury or fighting, the smaller one will grow large to replace it. A new, smaller claw will also regenerate in place of the missing one.