Flabbergasted by Hurricane Flossie--And More Than a Little Frightened

HURRICANE FLOSSIE IS NOT WILLING TO GIVE UP. DESPITE HINTS THAT THE HURRICANE MIGHT MOVE OVER COOLER OCEAN WATER TEMPERATURES...AND THAT IT WOULD EVENTUALLY ENCOUNTER HOSTILE VERTICAL WIND SHEAR...IT CONTINUES TO MAINTAIN ITS INTENSITY. THE LATEST SATELLITE INTENSITY ESTIMATES FROM JTWC AND SAB WERE 6.0...WHILE HFO REPORTED 5.5. THE ADT AT 1200 UTC IS 6.2...WHICH SUGGESTS A MAXIMUM SUSTAINED WIND SPEED OF 120 KT.

That's right: Flossie has strengthened since the last advisory (which had it at 115 knots). This storm isn't obeying any of the rules. And that's pretty unnerving....here is the latest image of Flossie approaching Hawaii: 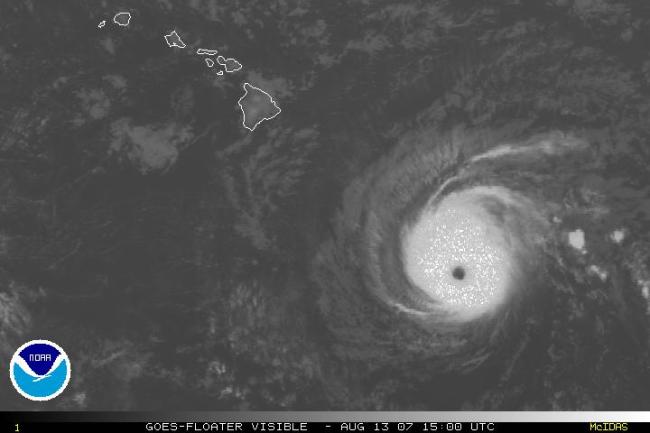 Meanwhile the National Hurricane Center is tracking Tropical Depression 4 in the Atlantic...which may soon be Tropical Storm Dean. This is one to watch closely...more soon.