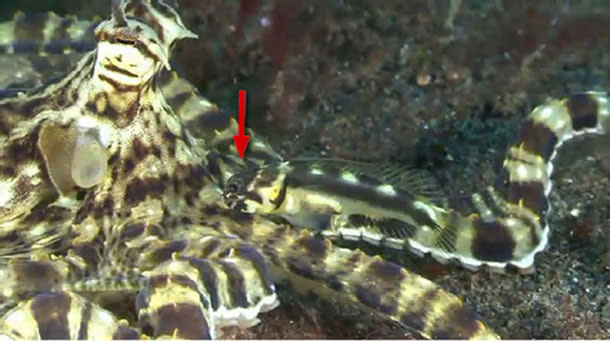 Many animals defend themselves by mimicking something distasteful, like a wasp or a venomous snake. But the mimic octopus can don a multitude of disguises. It becomes a sea-snake by pushing six arms down a hole and waving the other two around in a sinuous wriggle. It turns into a flatfish by folding its arms back into a leaf shape and undulating them up and down. Its repertoire of venomous animals potentially includes lionfish, sea anemones, jellyfish, and more. It is one of the most dynamic mimics in the animal kingdom. And now, the mimic has been mimicked. Last July, while diving in Indonesian waters, Godehard Kopp saw a black-marble jawfish hanging around a mimic octopus. The little fish perfectly matched the octopus in both colour and pattern, blending in among the brown and white stripes of its arms. [embed width="610"]http://youtu.be/u4kZAgny5eg[/embed] Kopp send his video to Rich Ross and Luiz Rocha of the California Academy of Sciences, who identified the fish. Jawfish spend most of their time in burrows. Out in the open, their poor swimming abilities leave them vulnerable to predators. The mimic octopus has no such problems. Its acts are so convincing that it is relatively safe from attack. By blending in with the octopus, the jawfish seems to have found a good way of moving about openly. Octopuses are predators in their own right, but this one certainly didn’t seem to mind its fishy companion. This relationship is probably a rare occurrence. The black-marble jawfish is found throughout the Pacific from Japan to Australia, while the mimic octopus only hangs around Indonesia and Malaysia. For most of its range, the jawfish has no octopuses to hide against. Instead, Ross and Rocha think that this particular fish is engaging in “opportunistic mimicry”, taking advantage of a rare chance to share in an octopus’s protection. 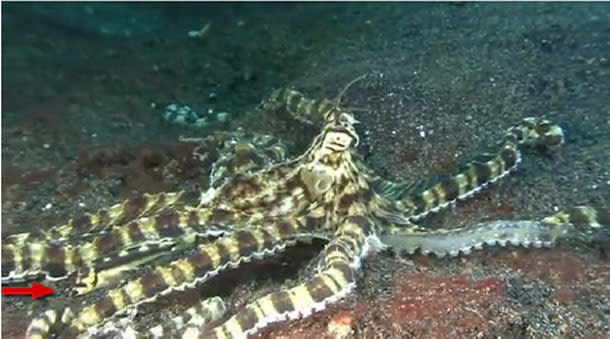