Fish May Lose Their Jelly Friends in a Changing Ocean 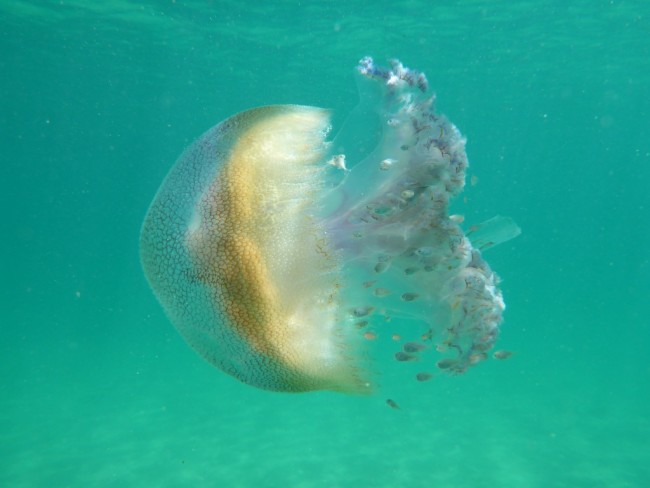 In the open ocean, it's good to have friends. Some young fish like to buddy up with stinging jellies to stay safe from predators. Hiding under the shelter of a jellyfish's bell, they can grow up unharmed (as long as they dodge its tentacles). These fish include some species that humans rely on for food. But in a warming ocean, that buddy system may fall apart. Many types of fish take advantage of hop-on jelly trolleys. Ivan Nagelkerken, a marine biologist at the University of Adelaide in Australia, and his colleagues focused their new study on the fish living with one jelly in particular: the delightfully named blue blubber jellyfish, or Catostylus mosaicus. (The jellyfish in the photo above is not a blue blubber, but you can see some C. mosaicus in all their blubbery glory at the bottom of this post.) The scientists took advantage of a jellyfish bloom in October 2014 to study this species. During a bloom, there can be more than one adult jellyfish—and 100 tiny babies—swimming in every cubic meter of water. The researchers traveled to a Queensland bay and used nets to scoop blue blubbers out of the ocean. Each adult was about a hand's-length across. Among the jellies' tentacles, the scientists found just one species of fish over and over. This was the yellowtail scad, or Trachurus novaezelandiae. "Because this association is in the open water, we really don't know much about it," Nagelkerken says. He knows young scads swim among a jelly's tentacles to stay safe from predators, and leave when they outgrow their hiding place. The scientists only found fish that were a few months old or so. They brought blubbers and scads back to the lab to learn how their relationship might change in the oceans of the future. In tanks, they gradually acclimated young fish to different types of water. Some fish lived in water that matched the carbon dioxide concentration of today's oceans. Other fish were in tanks with more carbon dioxide, representing the predicted concentration in the year 2100 if humans keep producing greenhouse gases at today's rates. The extra carbon dioxide makes the water a little more acidic. After the fish had gotten used to their water conditions, the researchers tested their reactions to blue blubbers. They used a thin rope to loosely tether a jellyfish to the top corner of a tank. Then they released a single fish into the opposite bottom corner of the tank and recorded its behavior for 10 minutes. They tested a total of 34 scad in this way. The scientists saw a difference between the behavior of fish that had been living in normal and more-acidic water. Fish from the acidic tanks spent about a third as much time near the leashed jellyfish. They made fewer attempts to get inside the jellies' tentacles, and fewer of them successfully teamed up with a jelly. In other words, fish from high-CO2 water were less likely to make a jellyfish friend. An experiment that exposed fish to just the smell of jellyfish suggested that odor isn't the cue they use to find blue blubbers. "The fish might rely more on vision to find the jellyfish, and to also avoid being stung by the jellyfish tentacle," Nagelkerken says. "Ocean acidification is also known to affect vision in fish." So fish in more-acidic water might stay away from jellies because their poorer eyesight keeps them from finding their blue buddies (or safely navigating their tentacles). If young fish in the future have a harder time cozying up to jellyfish protectors, they might be more vulnerable to predators. And since the species that hang around jellyfish include pollock and others that humans harvest for food, we might not find the future oceans very friendly either. 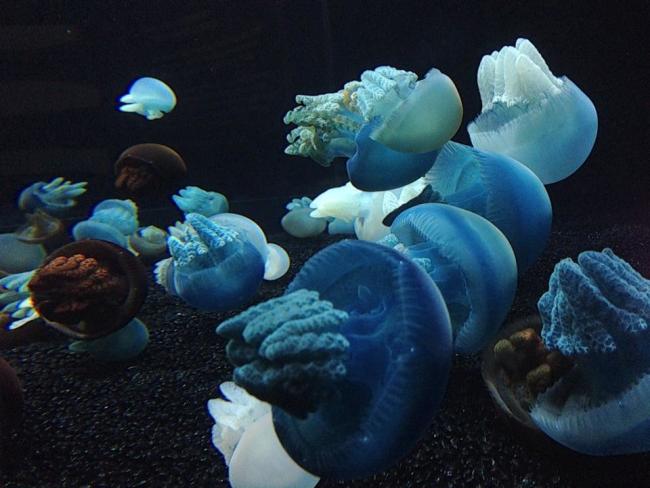 Images: top by James Brook; bottom by Via Fernandez (via Wikimedia Commons).