Expecting to find only microbes, researchers uncover a remarkable ecosystem. 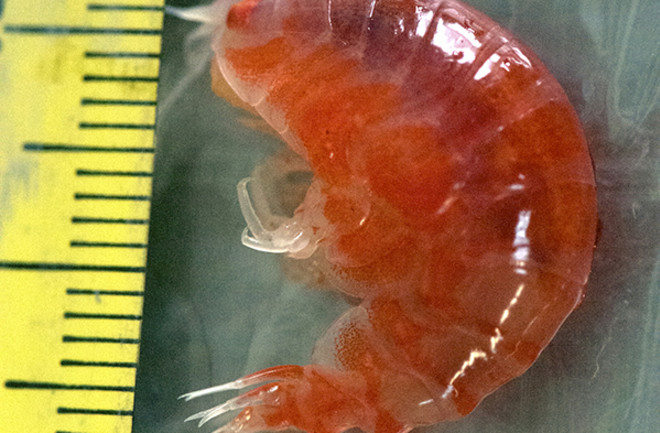 An amphipod is measured, in millimeters, in the field lab just after it was collected beneath Antarctica’s Ross Ice Shelf. | Reed Scherer/Northern Illinois University

Sign up for our email newsletter for the latest science news
A remote-operated vehicle’s camera captures an image of a fish living under nearly a half-mile of ice. | Reed Scherer/Northern Illinois University

In January, scientists in Antarctica discovered something amazing: fish living in a dark pocket of seawater under nearly a half-mile of ice.

An amphipod is measured, in millimeters, in the field lab just after it was collected beneath Antarctica’s Ross Ice Shelf. | Reed Scherer/Northern Illinois University

Scientists from the University of Nebraska-Lincoln and other universities bored a hole into an isolated nook where glaciers ooze off the coast and form the massive Ross Ice Shelf, a slab of floating ice the size of Spain. The hidden spot, 500 miles in from the ice’s edge, is far removed from life-sustaining sunlight, so the researchers expected to find only microbes. But when they sent down an aquatic robot, its camera revealed fish, crustaceans and other animals. It is the farthest under an ice shelf that animals have ever been found.

“It’s remarkable,” says James McClintock, a marine biologist from the University of Alabama at Birmingham, who was not on the expedition. “What intrigued me is, what is supporting this life?”

The ecosystem may be nourished at least in part by microbes that feed on organic goo in the subglacial mud — the remains of ancient plankton that died and sank to the bottom millions of years ago, when the world was warmer and this place was a sunlit sea.