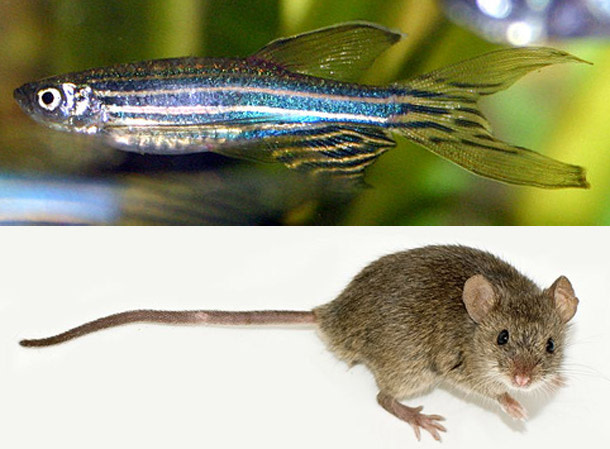 Whenever you pick up a book or take a step, you’re relying on a genetic legacy that’s been handed down since your ancestors swam about in prehistoric oceans. Your hands and feet– intricate bundles of bones and muscle – are your versions of the fins of fish. They may look very different, but they were sculpted from embryonic flesh using similar genetic programmes. The appendages of all four-limbed animals (tetrapods) are governed by a cluster of genes called HoxD. This group oversees the development of a whale’s flippers, a finch’s wings, and a chimp’s arms. They control how big a limb becomes, the number of the bones within it, and the shape of those bones. During an embryo’s early days, the HoxD cluster shapes the growth of the upper arms and legs. Later, a second wave of HoxD activity styles the wrists and fingers, ankles and toes. This second phase is managed by a genetic switch called CsB, which controls when and where the HoxD genes are activated. CsB is a controller of controllers, an executive director that leads a team of genetic managers. Igor Schneider from the University of Chicago has demonstrated the relationship between fins and feet by swapping the mouse and zebrafish versions of CsB. These species have inordinately different limbs, and they’ve been separated by 400 million years of evolution. Nonetheless, their swapped versions of CsB work perfectly well in each others’ bodies, driving the activity of each others’ HoxD genes. First, Schneider attached a gene for a glow-in-the-dark protein to the mouse version of CsB and loaded them into a zebrafish embryo. The glow would give away the parts of the embryo where the CsB switch was at work, overseeing the work of its HoxD minions. At first, the glow came from the brain and nervous system but within a few days, it was found in the outer edge of the developing fin. The zebrafish version of CsB did the same thing in the mouse. Schneider linked the switch to a different gene that produces a blue tint when activated (mouse embryos aren’t see-through like those of zebrafish so glow-in-the-dark genes aren’t as useful). Again, CsB was initially deployed in the brain and nervous system but was soon active in the wrist and fingers. Schneider found that the CsB of a skate (a relative of sharks and rays) also produced the same thing in the mouse embryo. Schneider’s swap was inspired by the discovery of a remarkable animal called Tiktaalik, dug up by his lab’s leader Neil Shubin. Tiktaalik lived around 375 million years ago and had limbs that were halfway between fishy fins and strong tetrapod legs (Shubin calls it a “fishapod”). The fins contained several bones that are comparable to those in our wrists and fingers. They could bear the animal’s weight, allowing it to prop itself up on flexed wrist joints. To Shubin, these similarities suggested that the genetic programmes that control the development of wrists had evolved in the sea, well before wrists existed. But there was a problem. An earlier study from 2002 found that the pufferfish’s version of CsB doesn’t switch on any genes in the limbs of a mouse embryo. This suggested that the wrists and feet of tetrapods might be governed by programmes that are unique to us, with no counterparts in fish. Back then, the pufferfish was the only fish genome available, but it wasn’t a very typical one. “This fish had the smallest genome of any vertebrate known and lacked key HoxD genes involved in limb development,” says Schneider. The pufferfish’s ancestors had also duplicated their entire genomes, leaving it with two copies of the Hoxd cluster and potentially two copies of CsB. These idiosyncracies could have accounted for the negative result. Schneider thinks that the pufferfish was an exception – after all, both the skate and zebrafish versions of CsB can happily take control of mouse genes. The genes back up the similarities seen in the fossils; they suggest that the predecessors of these genetic switches were around in prehistoric fishes. Of course, things have changed since then. The zebrafish CsB might switch on HoxD genes in the wrist of a mouse embryo, but it could never sculpt a proper paw. The mouse’s own CsB also switches on genes further up in the limb, right up into the fingers. This suggests that as fishes evolved into fishapods and tetrapods, the influence of CsB spread, so that it activated HoxD genes over a greater area. Other overseers were recruited – mice have a genetic switch called CsC that also controls the development of digits. It is similar to CsB but it has no obvious counterpart in fish. Now that Schneider and Shubin have identified genetic similarities between fins and feet, they’re going to look at some of the differences. Shubin says, “Subtle changes in the timing or location of gene expression may produce the dramatic differences in anatomy that first allowed animal life on Earth to explore land.” Reference: Schneider, Aneas, Gehrke, Dahn, Nobrega & Shubin. 2011. Appendage expression driven by the Hoxd Global Control Region is an ancient gnathostome feature. PNAS http://dx.doi.org/10.1073/pnas.1109993108More on the transition to land: