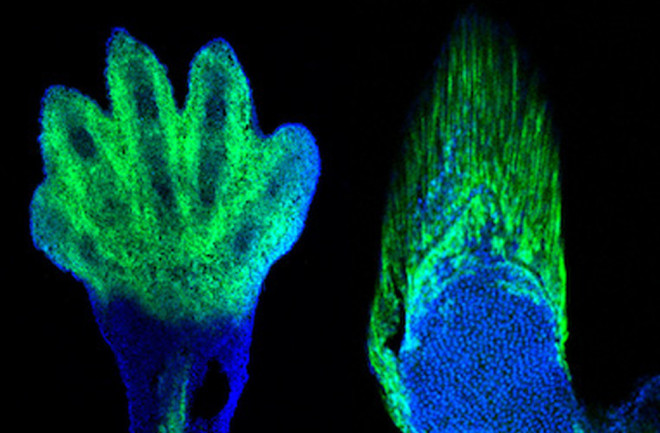 The same group of cells (highlighted in green) is responsible for creating digits in mice (left) and fin rays in fish (right). (Credit: Shubin Laboratory) Millions of years ago our ocean-dwelling ancestors stepped forth onto new shores and began populating Earth's dry land. Fossils such as Tiktaalik, one of the most compelling members of the class of transitional "lobe-finned fishes", mark the evolutionary path that led to land-bound animals. The transition from delicate fins to sturdy limbs didn't happen all at once, but it is clear that our appendages are distant cousins of fish fins. Using cutting-edge DNA mapping techniques, researchers from the University of Chicago have discovered fins and fingers emerge from the same group of embryonic cells, shedding light on how our earliest ancestors made landfall.

They focused their study on Hox genes, which are known to influence the body plan of an embryo. A subset of these genes controls fin and limb development, and the researchers selectively knocked out single genes in zebrafish to watch how they would develop. The scientists combined their knockout technique with a process called fate mapping, which follows the development of a group of cells from embryo to adult. They marked the embryonic cells with a fluorescent protein that tracked the movement of the cells as they grew and shifted into position in the developing fins. The dual approach identified the group of cells responsible for giving us hands and fingers or fish fins, and made it clear that the same group of cells played a key role in both developmental processes. The same cells that in mammals form hands and fingers are clustered at the very end of fins in gauzy structures known as fin rays. This was a surprise to the researchers because no one had ever linked fin rays to mammal digits before. The researchers published their work Wednesday in Nature.

Fins and fingers are ultimately composed of different materials, but at a very early stage, as the embryo sorts out which cells go where, fins and fingers share the same starting point. It is only later, as developmental genes are switched on, that the cells begin to differentiate. The Hox genes they looked at had exact analogues in mice, and previous studies had shown that mice with the same genes knocked out failed to develop wrists and digits. The clear connection between mice and fish, species separated by almost 400 million years, shows that our limbs and their fins begin as the same small clump of cells. When scientists knocked out several of these crucial genes, zebrafish grew substantially shortened fin rays while also displaying a greater number of the endochondral cells that normally go on to make mature limbs. That the fish only lost the ends of their fins stands as evidence that fin rays are the equivalent of hands and fingers in mammals today. It certainly gives a new meaning to "fish fingers."