For the First Time, Scientists Record the Slow Beat of a Blue Whale's Heart

The world's largest animal has a heart that might sit near the limit of what's possible. 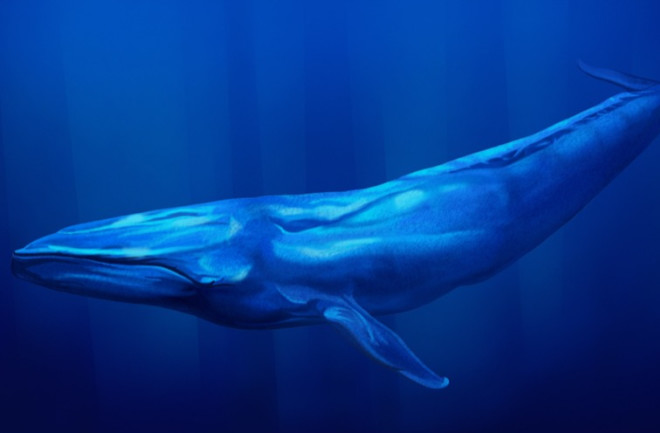 A blue whale swimming in the ocean. Their heart rates can drop to as low as two beats per minute while diving. (Credit: Atomic Roderick/Shutterstock)

The largest heart on earth — a 400-pound blood-pumping machine — beats about 13 times a minute.

That’s according to scientists' first recordings of the heart of a blue whale. The research team documented the rhythms thanks to a few suction cups that kept a heart rate monitor attached to a whale swimming and diving around California's Monterey Bay.

This is the first heart rate recording of any wild large whale, and the biggest one to boot: Blue whales are the largest animals ever known to have lived on Earth. And the recordings might hint at a biological limit for heart size in mammals. Based on their recordings, the researchers believe blue whales' hearts might be just about as big as they come.

It also clues biologists into how the whale accomplishes deep feeding dives, the authors report in a paper published in the Proceedings of the National Academy of Sciences.

Biologists know that blue whales are the biggest beings on Earth, but not why they’re the largest. Also up for debate: Could a cardiovascular system even support anything larger than these 200-ton beasts?

Another question for the researchers concerned the whales' feeding habits. Blue whales feed by diving several hundred feet below sea level. There, they take huge gulps of water in the hopes of trapping tiny shrimp called krill in their mouths. Those trips take a lot of energy, and the research team was curious how the heart coped with that strain.

So biologists and oceanographers from California and Washington gave a 15-year-old blue whale a heart test that many people have had in their own doctor’s office. Called an electrocardiogram, or EKG, it uses electrodes stuck to the skin to measure heart activity. Once the team was close enough to a wild whale, the biologists suction-cupped the device near the whale’s flipper.

A Lot of Heart

An illustration depicting how the blue whale's heart rate slowed and quickened as it dove, fed and surfaced. (Credit: Alex Boersma)

The shifting rhythms also give some clues as to how the blue whale heart handles diving stress. The super-slow beats at the bottom of the whale’s dives suggest that the main artery responsible for delivering blood from the heart to the rest of the body stretches to accommodate extreme pressure, the authors write.

Since the heart isn’t pounding fast to deliver extra oxygen on these trips, the team still doesn’t know how blue whales draw the energy or oxygen to complete them.

The team's work sets up future research into blue whales' and other species' diving habits. Sperm and bowhead whales, for example, go on even longer dives. With the first recording accomplished, we're only beginning to get to the heart of the matter.