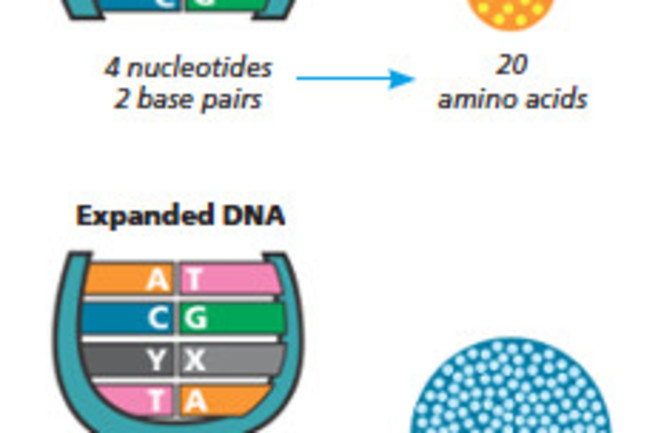 Normal DNA is made up of the nucleotides adenine, thymine, cytosine and guanine. Adding just one more pair of “letters” — X and Y — to the genetic alphabet opens the door to 172 amino acids, which could be used to build new proteins. | Jay Smith, after Synthorx

A chimera, in Greek mythology, is a creature made from parts of different animals — an alien monster. That’s how some might view the organism created by a team at Scripps Research Institute in California.

Expanding upon DNA’s complement of four chemical nucleotides, or “letters” (A, T, C and G), the scientists concocted a totally unnatural pair of nucleotides, dubbed X and Y. As reported in Nature in May, the team inserted the two into a bacterial cell, a strain of E. coli. When the cell reproduced, unwinding its double helix and reconstituting it in new cells, X and Y replicated as well, their chemical bond just as stable as the A-T and C-G pairings in DNA’s normal sequence.

The leader of the Scripps team, Floyd Romesberg, calls the organism “semi-synthetic.” He promises it could never survive outside the lab because the foreign nucleotides, deprived of their chemical feedstock, would quickly be deleted. “We are focused on what’s practical,” he says. “We’re not trying to create new life, but to increase proteins’ potential. . . . With more [DNA] letters, you can tell more interesting stories.”

Pharmaceutical companies increasingly look to proteins as templates for new drugs. However, protein molecules are much larger than most drug molecules, and synthesizing them is a “laborious, one-at-a-time” process, says Romesberg. “It’s a huge advantage that the cell does the heavy lifting for you.”

Cell factories, their DNA tweaked by different combinations of nucleotides, may one day generate therapeutic proteins that could be tested against each other in cultures. Romesberg calls this “directed evolution — you apply selection pressure to the cells, and you [keep] those that do what you want the best.”