The invasion of land by the tetrapods - four-limbed animals that include mammals, reptiles and amphibians - was surely one of the most evocative events in animal evolution. The march onto terra firma began some 365 million years ago and was driven by a suite of innovative adaptations that allowed back-boned animals to live out of water. 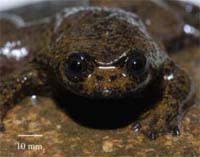 Lungs were among the most crucial of these for they allowed the first land-lubbers to extract oxygen from the surrounding air. That ability is so important that it's rare for tetrapods to lose their lungs completely. Until now, the only groups that we know have done so are two families of salamanders and a lone species of caecilian (a type of burrowing worm-like amphibian).

Now, David Bickford and colleagues form the National University of Singapore have expanded that list with the discovery that a species of frog - the Bornean flat-headed frog (Barbourula kalimantanensis)- also lacks lungs of any sort.

The small species, also known as the Kalimantan jungle toad, is one of the most primitive of all frogs. It's almost completely aquatic and lives in fast-flowing streams on the island of Borneo. Bickford found nine specimens on a recent expedition to the island in 2007 and before then, only two specimens had ever been found in almost 30 years of searching. Through dissections carried out right there in the field, Bickford confirmed that the frog has no lungs.

Instead, it breathes through its skin, an ability it shares with many other amphibians. It's no coincidence that among all the tetrapods, only the amphibians are known to lose their lungs for this group straddles the dividing line between life in water and on land. They skins are permeable and many species use them to supplement the oxygen they inhale with passive diffusion. Even so, the amphibians have only lost their lungs altogether four times during the course of their evolution. 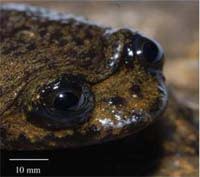 Bickford suggests that many factors have contributed to the flat-headed frog's lack of lungs. It lives in cold, fast-flowing waters that provide a rich supply of oxygen and most likely lower the frog's metabolic rate. So to the frog, oxygen is in high supply and low demand. The flattened body and head which gives the flat-headed frog its name also give its skin a large surface area for absorbing oxygen from the surrounding water.

These ideas fit with the 'stream origin theory' for the lungless salamanders, which suggests that an animal with buoyant lungs could find itself swept away by fast-moving water. Without lungs, both salamanders and the flat-headed frog can sink to the river bottom. There, the frog's flat body helps it to hide under rocks and indeed , both the previous specimens were found by overturning riverbed rocks. The frog's flat body may even have evolved to suit this lifestyle.

Bickford describes the frog as an "evolutionary enigma" and notes that almost nothing is known about its life or behaviour. He also fears that our chances to study it may be few in number for the creature is endangered. Its streams have been contaminated with mercury and clouded up by runoffs from illegal gold-mining operations, and the surrounding forests are threatened by logging, both legal and illegal. Strong conservation efforts are needed if the Bornean flat-headed frog is to escape the fate that is befalling so many other amphibians the world over.

Reference: This paper will be published in Current Biology and a citation will go up when it does.