First Look At The First Flower, Ancestral To All Others 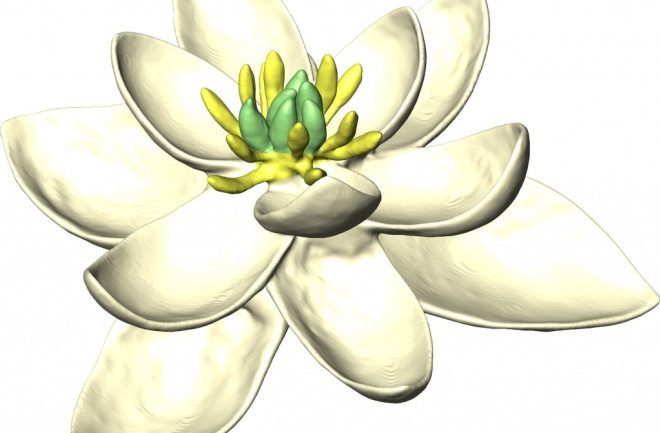 The first flower, revealed today by researchers in Nature Communications, is more than 140 million years old. (Credit Hervé Sauquet and Jürg Schönenberger) About 90 percent of all terrestrial plants today are angiosperms, or flowering plants. Yet finding the flower ancestral to them all has been a, ahem, fruitless search. Until now. Although plants do turn up in the fossil record — such as the stunning 52-million-year-old tomatillos revealed earlier this year — some of the most important, evolutionarily speaking, remain elusive. Such is the case with the first angiosperm, which researchers estimate evolved between 140 million and 250 million years ago. Once on the scene, flowering plants diversified rapidly, spreading around the globe and taking over from the previously dominant gymnosperms (which today survive as conifers, cycads and a variety of bushy species). Gymnosperms, which have been around for at least 383 million years, have exposed reproductive parts, just hanging out there for all to see. But angiosperms evolved to have their bits enclosed in often elaborate flower structures that mature into fruits. Today, about 9 out of every 10 plants on the seven continents (yes, even Antarctica has 'em) are angiosperms, ranging from the stinky corpse lily to the dandelions popping up in your yard. Despite their enormous diversity in appearance, life cycle and ecological niche, researchers believe all 225,000-plus species of angiosperms descended from a single ancestor. Finding that very first "ancestral flower" has been the mission of many a budding paleobotanist. But so far the oldest fossil flowers found have been about 130 million years old, and the handful of examples are already diversified into distinct species. A New Approach Blooms Without fossil evidence, researchers turned to another avenue of research: the data crunch. Reporting today in Nature Communications, a team compiled the world's largest bouquet of flower trait data points — nearly 13,500 of them from 792 species representing 98 percent of all angiosperm orders (that's three layers up from species in taxonomic ranking). That's one heck of a daisy chain of data. From all that information on flowers living and fossilized, the researchers used molecular dating to build a chronogram. In other words, they number-crunched a family tree, based on differences between species, which arose through mutations. These mutations occur at a fairly steady rate, so the more differences there are between two species, the further back you'll find their last common ancestor (LCA). At the same time, by moving back in time along the lineage, researchers can strip away derived traits — characteristics that arose from those later mutations — and zero in on the traits most likely present in the LCA. The methods of analysis for this kind of study — and the team used three different approaches — are all complex and may seem a bit brain-numbing to the outsider not immersed in them. (Don't believe me? Google reversible-jump Markov Chain Monte Carlo Bayesian approach. I'll wait.) And quite frankly, getting into the weeds of Bayesian computation is beyond the Dead Things mission. But what is important to understand is that these are tested, respected methods, widely used in the field. The team didn't pull the first flower out of thin air. Most importantly, the team's results created a testable hypothesis for the diversification of the earliest angiosperms that other researchers can now, well, test. The Root Of It All According to today's paper, the ancestral flower was bisexual, with both male and female parts, and had whorl formations of petal-like organs, in sets of three, rather than spiral formations. Perhaps most interestingly, no living species has the same combination of characteristics suggested by the data-driven model. But don't just take it from me. Today's paper is open access to all, so dig in and enjoy.

A simplified version of the angiosperm evolutionary tree based on today's paper. (Credit Hervé Sauquet and Jürg Schönenberger)