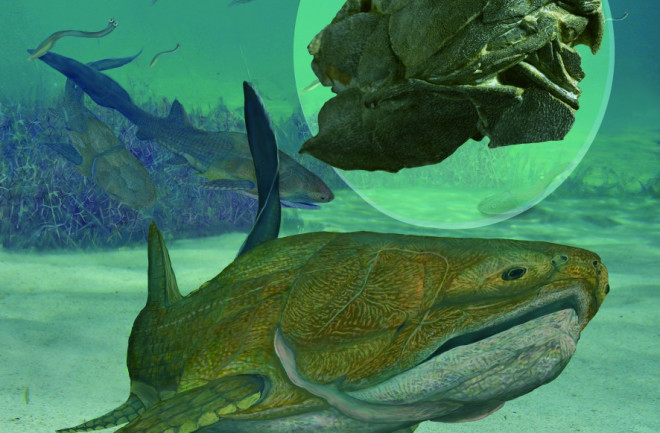 Some 420 million years old, Entelognathus primordialis may have been the first vertebrate with a modern jaw. Illustration credit: Brian Choo It's a face only a paleontologist could love. A Chinese team has found a well-preserved fish fossil that, at nearly 420 million years old, is the earliest example of an animal with a modern jaw. The discovery, published in today's Nature, revises the evolutionary path for Earth's earliest vertebrates.

Entelgnathus primordialis was an eight-inch-long placoderm — a kind of armored fish — and lived in seas that covered China 419 million years ago. Like other placoderms, Entelgnathus has armored plates on its head and thorax, but it also has more advanced jaw bone features. These more modern premaxilla, maxilla and dentary — collectively known as dermal marginal jaw bones — previously were seen only in bony fishes, or osteichthyans. The mosaic of primitive and more evolved characteristics found in Entelgnathus suggests it may not be a distant relative of modern fishes, as placoderms are generally considered, but rather a possible ancestor.

Fish With a Face

The fish is quite a catch for paleontologists, who have long struggled to understand the evolutionary course from jawless vertebrates to animals with modern jaws, or "faces." The evolutionary relationship between the extinct placoderms and osteichthyans, as well as cartilaginous fish known as chondrichthyes, is incompletely understood. Previous theories suggested that cartilaginous fish either gave rise to or shared a common, non-placoderm ancestor with osteichthyans. The discovery of Entelgnathus, however, could point to placoderms being the ancestors of both other types of fish, an enormous range of species both in the fossil record and swimming through today's waters.