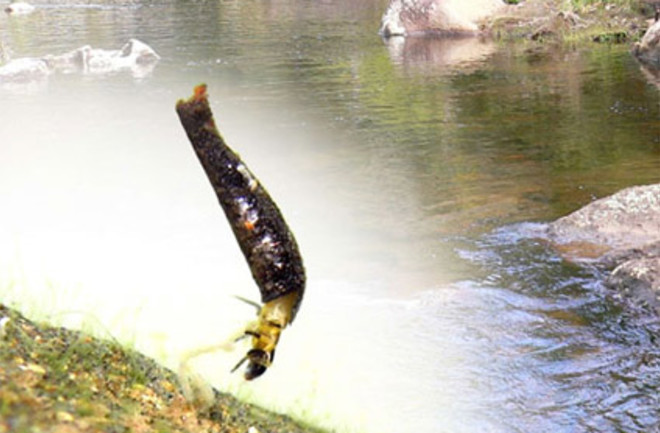 As if living in Hawaii weren't a great enough life, scientists have found a kind of caterpillar there that lives the best of both worlds—in water and on land. In the Proceedings of the National Academy of Sciences, Daniel Rubinoff's team found that 12 species in the Hawaiian moth genus Hyposmocoma are amphibious in their caterpillar stage, the first amphibious insects ever found. While most caterpillars are terrestrial (living on land), there are a few—0.5 percent—that are aquatic. However, all of the caterpillars seen before preferred either one or the other. Even classical amphibians, like the toad, often live mainly in one environment and seldom return to the other, perhaps just to lay eggs. But the Hyposmocoma caterpillars seem to have adopted a chilled-out Hawaiian way of life, comfortable with whatever environment they might be in.

"They can stay underwater for an indeterminate period of time, or out of the water," said Rubinoff, an entomologist. "There's no other animal that I'm aware of that can do that" [Honolulu Advertiser]

. Rubinoff was actually studying the moth because of a different quirk: In its caterpillar stage, the insect builds a sort of container for itself from silk and whatever base material might happen to be lying around.

Researchers have also found cases in the shapes of cigars, candy wrappers, oyster shells, dog bones and bowties. “We’re running out of names to describe them,” Rubinoff says [Science News]

. During an excursion to document this weirdness, a surprise shoved him in a different direction: Rubinoff saw caterpillars he previously thought to be landlubbers living happily in water. So he brought a bunch of specimens to the lab, first testing how they took to water.

When the insects flourished, he stranded them in petri dishes with only a bit of carrot and no water. The caterpillars seemed equally at ease in both situations. Whether they're under water or without a drop of moisture for the duration of their adolescence, "these guys don't care," says Rubinoff [ScienceNOW]

. They do have a preference for faster-moving water rather than still pools, however. Rubinoff says the caterpillars don't have gills, but rather breathe through their skins while underwater. Thus, a rushing, oxygen-laden stream in their best friend, and their strong silk anchors them against the current. You can always count on the isolation of islands to spur weird and cool examples of evolution. Hyposmocoma doesn't disappoint. Rubinoff guesses from his genetic analysis that they've been evolving in Hawaii for 20 million years, and he guesses there are actually twice as many species as the 400 already discovered.

In 2005, Rubinoff described a caterpillar that hunts down and eats snails. Other caterpillars in this genus feed mostly on rotting wood in the manner of termites, which are relative newcomers to Hawaii [Science News]