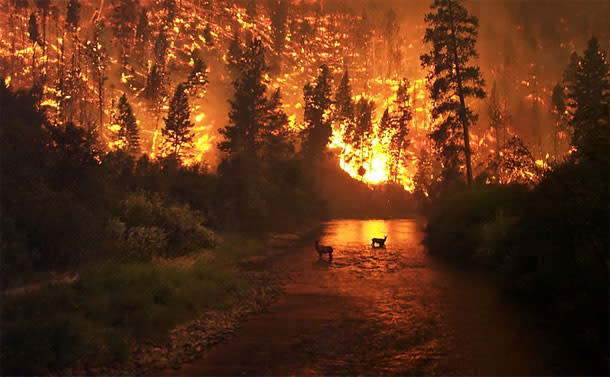 In the 1940s, visitors watching football games at Berkeley’s Californian Memorial Stadium would often be plagued by beetles. The insects swarmed their clothes and bit them on the necks and hands. The cause: cigarettes. The crowds smoked so heavily that a cloud of smoke hung over the stadium. And where there’s smoke, there’s fire. And where there’s fire, there are fire-chaser beetles. While most animals flee from fires, fire-chaser beetles (Melanophila) head towards a blaze. They can only lay their eggs in freshly burnt trees, whose defences have been scorched away. Fire is such an essential part of the beetles’ life cycle that they’ll travel over 60 kilometres to find it. They’re not fussy about the source, either. Forest fires will obviously do, but so will industrial plants, kilns, burning oil barrels, vats of hot sugar syrup, and even cigarette-puffing sports fans. The beetles find fire with a pair of pits below their middle pair of legs. Each is only as wide as a few human hairs, and consists of 70 dome-shaped sensors. They look a bit like insect eyes. In the 1960s, scientists showed that the sensors detect the infrared radiation given off by hot objects. Each one is filled with liquid, which expands when it absorbs infrared radiation. This motion stimulates sensory cells and tells the beetle that there’s heat afoot. 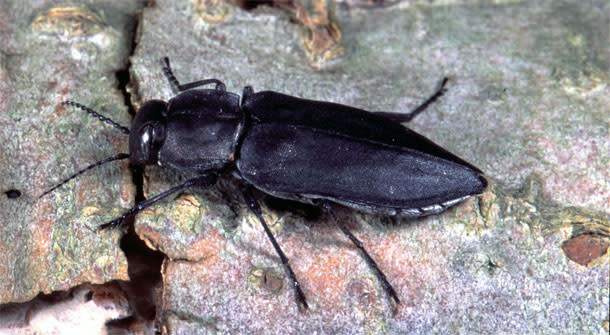 The ability to sense infrared radiation explains why, in the past, fire-chasers have gathered in places with neither open flames nor smoke plumes—they don’t need to see the signs of fire to know it’s there. Their detectors must be extraordinarily sensitive for they have arrived at sites that are dozens of miles from the nearest forests. Until now, the most generous estimates say that the beetles’ infrared sensors can detect changes in heat of more than 600 milliwatts per square metre. But that’s based on very unrealistic artificial lab experiments, where beetles were glued to rods and bombarded with infrared. It also can’t be right. At this sensitivity threshold, they could only spot the heat of big forest fires from a maximum 10 kilometres away, and we know they fly from much further afield than that. To measure how sensitive the pits really are, Helmut Schmitz from Bonn University and Herbert Bousack from the Julich Research Centre took advantage of a freak event. At 11.20 am on 10^th August 1925, lightning ignited an oil depot near Coalinga, California. Tens of thousands of barrels worth of oil went up in flames. By the evening, the burning oil had created a lake of fire, sending flames hundreds of feet into the air. Melanophila beetles descended upon the site in untold numbers. The beetles must have travelled far. The oil depot was in the middle of an unforested area with no groups of trees within 10 kilometres. The closest patches were either blocked by terrain, or hadn’t experienced any fires in the preceding years (and so were unlikely to have housed large beetle populations). Instead, Schmitz and Bousack think that most of the beetles came from the Sequoia and Kings Canyon National Park, some 130 kilometres away to the east. Schmitz and Bousack created simulations of the oil depot blaze, using methods commonly used to assess fire safety and risk. This told them how much heat the fire gave off. To sense that from 130 kilometres away, Schmitz and Bousack calculated that the beetles’ pits must be able to sense a minimum of 0.13 milliwatts per square metre of changing heat flux. That makes them about as sensitive as the radio telescopes used in astronomy, and certainly more sensitive than any infrared detector currently on the market. At such low intensities, any signal from a distant fire would be buried in thermal noise – the random fluctuations in heat going on in the beetle’s environment. It’s possible that the beetle filters out the signal by comparing the readouts from the 70 to 90 receptors in each pit. Alternatively, Schmitz and Bousack suggest that the beetles may be using a phenomenon called stochastic resonance. Here, an oscillating signal can actually stand out more strongly if the amount of noise around it increases. We already know that some animals have neurons that use stochastic resonance. For example, a species of cricket can use this phenomenon to detect the changes in air pressure produced by the wing beats of an approaching wasp. The bizarrely-snouted paddlefish can use it to spot the electric fields produced by their plankton prey. No one knows whether the fire-chasers do the same, but Schmitz and Bousack say that it’s a “reasonable” hypothesis—perhaps the flickering of the fire provides an oscillating signal. Their estimates certainly fit with everything we know about the Coalinga inferno. But to truly test the beetle’s infrared-detecting powers, scientists will have to measure how the pits respond to infrared radiation in careful lab experiments. If the measurements bear out, perhaps studying these exquisitely sensitive natural sensors might inspire the designs of similarly powerful man-made ones. Reference: Schmitz & Bousack. 2012. Modelling a Historic Oil-Tank Fire Allows an Estimation of the Sensitivity of the Infrared Receptors in Pyrophilous Melanophila Beetles. PLoS ONE http://dx.doi.org/10.1371/journal.pone.0037627Image by John McColgan (fire) and Helmut Schmitz (beetle) More on infrared senses: