A serendipitous discovery leaves scientists thanking, and cursing, the weather. 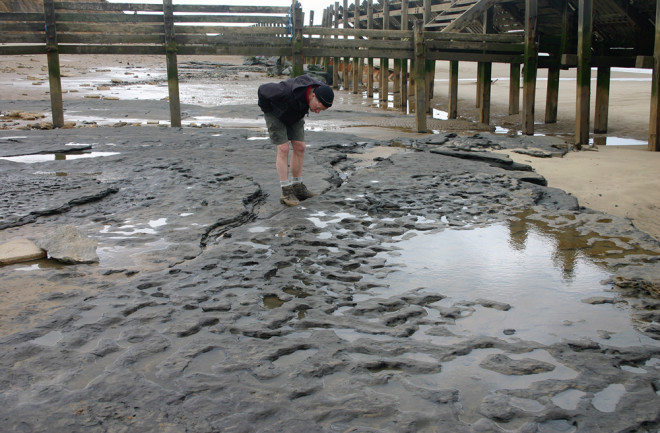 The East Anglian villageof Happisburgh, on the U.K.’s Norfolk coast, is a picturesque farming community of about 1,400 people. For 150 years, severe coastal erosion from groundwater and the North Sea has undermined land near the beaches — but that’s not always a bad thing. Just ask British paleoanthropologist Chris Stringer.

Stringer, of the British Natural History Museum, is best known as a founding theorist of the so-called “out of Africa” theory, which contends that modern humans evolved in Africa before radiating around the globe. In May 2013, he was part of a team conducting an excavation on a beach near Happisburgh when the researchers stumbled upon a treasure, a gift that was the result of erosion.

After a portion of cliff was washed away by the sea, the team found ancient hominid footprints within the hardened clay that had been buried beneath, dating back about 900,000 years based on the vegetation preserved in the clay’s sediments. The researchers had to rush to document the prints before the ocean and the elements washed away the newly exposed and vulnerable discovery.

In His Own Words

We’ve been excavating a site on the beach about 10 meters from the high tide line for about 10 years, finding stone tools and ancient mammal bones and teeth. We didn’t know that we would find anything like this, and of course the first reaction was disbelief.

Richard and Martin Bates, two team members (who are brothers), had been on the beach doing some coring and a geophysical survey to map river deposits. They were walking along the beach and suddenly came upon these depressions, which were about twice as long as they were wide — exactly the proportion of a footprint.

The weather was appalling; it rained the whole time. Every time you tried to mop the water out of the prints, they would just immediately refill.

The prints were found in an intertidal area and had been uncovered about a week when we found them. Twice a day the tides were steadily washing them away — within a couple of weeks they’d disappeared.

We were able to lift one footprint in the sediment, and with digital photography we’ve replicated many of the others in 3-D. In two of the 3-D replicas you can even see the toes. Feeling the shape of these prints is the next best thing to actually touching the living person who made them.

We believe these were probably left by the ancient species called Homo antecessor. Along with the stone tools we’ve excavated, these prints help to push back the timeline of known hominid occupation in Northern Europe by at least 200,000 years.

There’s quite an element of luck in this discipline. Of course we can now use much more systematic methods of searching, such as Google Earth, to locate promising sites, but you still need luck to make the really big finds.