Filled: A 600-Million-Year-Old Gap in the Fossil Record 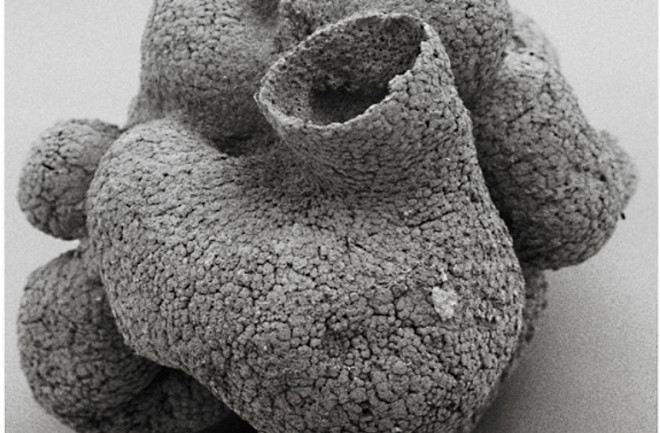 A fossil smaller than a sesame seed has revealed the invisible early history of animals on Earth and could reconcile a major evolutionary paradox. Previous phylogenetic studies, which model the evolution of groups of related organisms, have suggested that the animals that gave rise to sea sponges, sea anemones, worms and crustaceans first appeared 600 million to 700 million years ago. But until now, scientists had no undisputed fossil evidence of any animals at all prior to about 575 million years ago.

The new fossil, apparently an ancestor of the Precambrian sea sponge, was found in 600-million-year-old rocks in China. Its hundreds of thousands of microscopic cells are spectacularly preserved in phosphate minerals. The body consists of three vaselike openings, the walls perforated by tiny pores — just like modern sponges, which pump water through the holes to filter out food.

Previously, these same rocks have yielded minuscule fossils, containing eight or 16 cells, thought to be sponge embryos. The new fossil is more convincing because it finally shows an adult animal, says Eric Davidson, a developmental biologist at the California Institute of Technology and part of the team that reported the fossil last March.

The rock layer in southern China, called the Doushantuo Formation, is famous for its microfossils. “It probably holds the secret of early animal life,” says Davidson, who believes that fossils yet to be found will paint a clearer picture of the first emergence of complex life. “Somebody’s got to just do the digging.”