Figuring Out How Bats and Dolphins Developed Echolocation 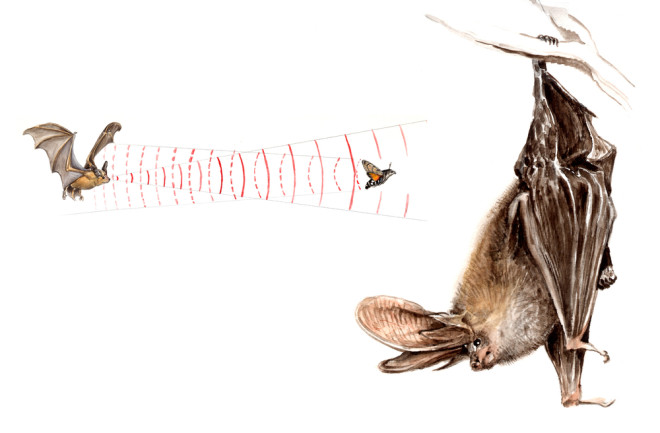 Bats and dolphins are seemingly polar-opposite creatures, but they do share a special skill: echolocation. This ability — mapping out the area via the reflection of high-pitched sonic signals you send out — comes in handy when you’re navigating the night skies or the murky depths of the ocean. Researchers already knew this ability came about through convergent evolution, when two or more unrelated species develop the same trait independently. But a recent paper published in Science Advances announced that researchers have identified genetic characteristics that could have helped bats and dolphins develop this super power.

An international group of scientists combed through the genomes of both creatures, looking at them side-by-side to spot any similarities. Specifically, they were looking for amino acids, the building blocks of life, that showed up in the same spot on the genome in both bats and dolphins.

Of course, they found some similarities published in past work, but they also found some new ones. These amino acids were linked to proteins involved in the development of so-called fast-twitch muscles. As the name implies, fast-twitch muscles are involved in quick movements. (For instance, in humans, sprinters tend to have a lot more fast-twitch fibers that make up their muscles.) Specifically, the researchers realized the proteins that these shared amino acids were linked to showed up in a very specific muscle, at least in bats. It drives what’s called a terminal buzz: the rapid increase in the high-pitched calls a bat makes as it hones in on its prey. Dolphins also produce this terminal buzz when they’re hunting.

The fact that these amino acids show up in the same spot in the genomes of these two critters, the researchers say, could be part of what helped them evolve this skill. There’s still more to uncover to figure out exactly how bats and dolphins each developed echolocation independently, but it seems we’re on the right track.