Fierce, Territorial Llamas Act as Bouncers for a Wildlife Refuge 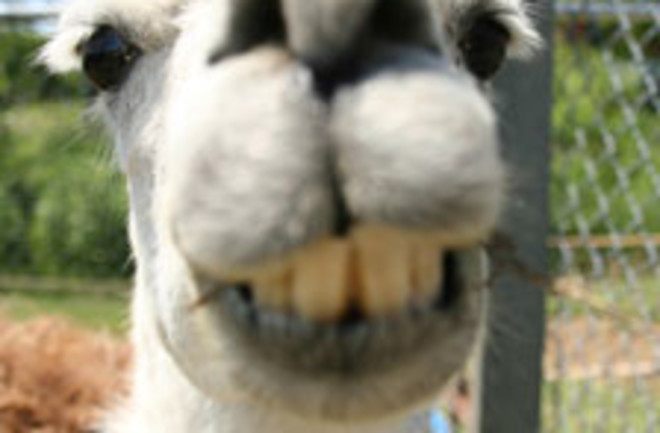 The guys guarding the velvet rope at downtown's hottest nightspot may be tough--but at least they don't spit like these llama bouncers. The BBC reports that two llamas, Willy and Jack, have been drafted to protect the eggs and chicks of wading birds at the Merseyside nature park in Britain--in particular, they'll guard lapwing and redshank birds, which are threatened species in England. Researchers say that the highly territorial llamas will kick up a fuss if intruders drop by, and will scare away foxes and other predators looking to snack on eggs or chicks. With the llamas on watch, the park officers hope, the young birds will have a shot at survival. This is not the first time that llamas have been deployed to protect livestock. The llama and its relative the alpaca have previous work experience protecting lambs and sheep from predators. Alpacas, in fact, come with great references—having been employed by the Prince of Wales to protect his lambs from foxes during lambing season at his Gloucestershire estate. Looking at the llamas' resumes, it’s their bouncing skills that stand out. The BBC describes:

It is hoped their slightly erratic behavior, along with the groaning noises and the sound they make when afraid or angry, will be a deterrent. They are also known to spit at and attack each other when provoked, but are gentle creatures when calm.

When they're off duty, Willy and Jack are quite the charmers; with a local farmer telling the BBC, "The 'boys' are a great hit with locals and visitors to the reserve." Related Content: Discoblog: Last Night a Llama Saved My Life: Animal Antibodies Could Treat Cancer, Diabetese DISCOVER: Secrets of the Alpaca Mummies Image: Flickr / Nao-Cha