Field Notes: Stalking Fish in the Name of Science

An exhaustive new marine census is tracking everything that swims in the sea, one fish at a time. 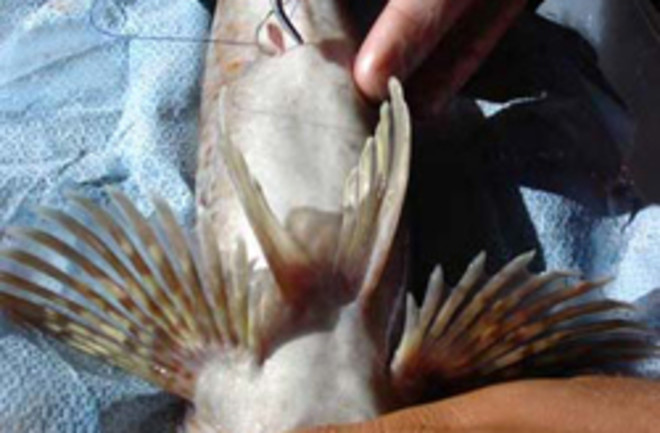 Cordova, Alaska—The number of fish in the sea, long a metaphor for limitless possibility, is finally coming to a head count. An ongoing, decadelong effort by scientists from more than 80 countries to fathom the contents of the global ocean will culminate next year in a definitive Census of Marine Life.

Inspired by the depth of human ignorance about the underwater realm, census researchers have already found what they believe are more than 5,000 previously unknown marine species. The teams have also tagged and tracked many familiar creatures, uncovering surprises to science and commercial fisheries alike. For example, California green sturgeon, once considered homebodies, actually gather each year at Vancouver Island in British Columbia before swimming another 1,500 miles to winter in Alaska.

The census encompasses an alphabet soup of projects, including ChEss (Biogeography of Deep-Water Chemosynthetic Ecosystems) and TOPP (Tagging of Pacific Predators). But, just as a journey of a thousand miles begins with a single step, the grand scope of the Census of Marine Life can be appreciated through the study of a single species of fish—in this case, the lingcod, Ophiodon elongatus, tracked through the Pacific Ocean Shelf Tracking Project (POST). Prized by diners for its tasty white flesh, the yard-long lingcod is a voracious predator that ambushes other fish among the submerged rock pinnacles and kelp thickets of Prince William Sound. Over the past couple of decades, authorities fear, lingcod stocks in some areas along the Pacific coast have been dangerously depleted by overfishing.

I had never seen or (knowingly) eaten a lingcod before visiting its habitat near this coastal fishing town in south central Alaska, where I joined ecologist Mary Anne Bishop and researcher Brad Reynolds, both of the Prince William Sound Science Center in Cordova, on a field trip to monitor lingcod movements by tracking acoustic transmitters implanted in the fish.

Bishop and Reynolds start out by fishing for lingcod much the way any vacationer might, with a hook and line. But when they land their subjects, they anesthetize and prep them for surgery. Cradled upside down in the V-shaped surgery board with a steady stream of piped seawater aerating its gills, each lingcod gets an acoustic transmitter, about the size of a double-A battery, implanted in its abdomen. The transmitter emits an electronic ping every minute or two at a specific sonic frequency (69 kilohertz, far above human hearing) that allows observers to follow the fish’s trail.

“It’s tricky work,” Reynolds says of the implantation process. On a large fish, he has to cut through nearly an inch of muscle. When he nears the abdominal wall, he has to proceed “maybe a millimeter at a time,” to avoid injuring internal organs.

“The lingcod mouth is just cavernous,” he points out in a photo he took while diving among them. “And their bellies are often so distended, as though they can’t tell when to stop eating. They’re the one fish that makes me glad I’m not a fish.”

After inserting the transmitter, Reynolds closes each incision with two sutures, spreads an antibiotic compound on the wound, and puts the fish in a “recovery tub” for a few minutes until its normal, upright swimming proves that it has fully awakened from anesthesia. Before throwing the lingcod back into its element, he punches a tiny, external plastic tag through the muscle beneath its dorsal fin as a signal to fishermen. Sport fishermen and members of the local fishing fleet are alert to the possibility of netting an “experimental fish” and are aware that they should call the phone number on the tag if they find one. Receiving such a call would be gratifying, Bishop allows, but it would mean that a fish had migrated out of the study and onto someone’s dinner plate. To date, all the tagged lingcod have eluded this fate.

Fortunately for fish and scientist alike, neither the pinging of the transmitter nor the red color of the little plastic tag seems to mark the lingcod as easy prey. “Red pretty much disappears at a depth of 30 feet,” Reynolds explains, while lingcod spend most of their lives down at 100 to 200 feet. And, he adds, tests have shown that hungry predators are not attracted by the acoustic pings.

By the time of my visit, the team had tagged 14 lingcod. (They plan to tag another 16, for a total of 30, soon.) If that seems like a small number of subjects for a major study, consider the fact that each acoustic transmitter costs approximately $300 to $550, not counting the investment of researchers’ time and the expense of chartering a boat for the implantation phase. Nonetheless, since transmitter batteries last about two and a half years, the amount of information gathered from the small sample will eclipse the sum of all prior knowledge. What’s more, half the fish chosen for implants are “subadults” whose changing behavior patterns can be followed over several seasons as the fish mature, mate, and reproduce.

Since receiving their implants last October, the 14 locally broadcasting lingcod have continually reported their whereabouts to an array of receivers moored at the bottom of a bay northwest of Cordova called Port Gravina. The system functions automatically. Tagged fish constantly emit their periodic pings, and every time one of them swims past an underwater receiver, the device hears the ping and takes note: It records the identification number of the passerby along with the date and exact time. The more expensive transmitters also provide a measure of the fish’s depth.

These detection records can accumulate underwater for months at a time. In fact, Bishop and Reynolds had left the fish and the array unsupervised most of the winter. On May 7, when I joined the researchers aboard the vessel Auklet, they were embarking on a two-day data-retrieval mission. Sea conditions were calm—so calm that Bishop described Prince William Sound as “Lake Prince William.” As usual during spring and summer months here, it was raining. David Janka, skipper of the Auklet, quipped that the Chamber of Commerce should change its tourist pitch from “Cordova—Alaska’s Hidden Treasure” to the more descriptive “Cordova—Paradise with Rain.”

We located the first receiver by maneuvering to its coordinates with the help of a Global Positioning System unit. Next, Reynolds connected his laptop to a modem that sought communication with the receiver 200 feet beneath us, “interrogating” it to find out which fish had frequented the area. The receiver had counted 127 pings since January, when Reynolds had last visited. Only half of that traffic turned out to be lingcod; the other half were salmon sharks.

The first fish to appear in the data stream was one of those sharks. Reynolds could see by the animal’s identification number that it had been tagged by colleagues at the Stanford University Hopkins Marine Station in Monterey Bay. “I hope it didn’t eat our lingcod,” he said. “I don’t think it did.”

Next, two lingcod registered their presence in the data stream—both males, according to identification records in Reynolds’s waterproof notebook. Following their implantation surgery, the fish had stayed near their release site for a couple of months, then moved on to a new habitat in nearby rock pinnacles, where they were now getting picked up by this receiver. Among lingcod, Bishop explained, the male not only chooses the nesting area—which he uses to help attract a mate—but also guards the nest after the female deposits her eggs there. The census study should help determine whether the fish remain close to home or migrate and then return to the same areas year after year.

Reynolds stored the season’s complete data set in his laptop’s hard drive and also on a separate flash drive, for safety, before we headed for the next receiver in the array for another upload. At the end of the day he planned to relay the accumulated information to the POST Project database, housed at the Vancouver Aquarium in British Columbia, to be sifted, sorted, and distributed to all POST participants. Within a day or so, the shark researchers in California would receive an automatic e-mail notification from POST regarding their subjects’ recent whereabouts.

When the Auklet arrived at our second site, a female lingcod with tag number 28781 obligingly swam by and announced her presence with a ping. We lowered a tiny video camera over the side, hoping to watch the underwater action live on a screen in the ship’s wheelhouse, but our lingcod stayed out of sight.

The data stream, on the other hand, revealed a great deal of activity—459,366 detections since the January visit. The large number of detections made sense: Lingcod had been tagged near this receiver in the first place, and for them the area was probably home. Even a relatively sedentary fish like the lingcod can rack up a large number of detections by swimming back and forth or circling in a small vicinity within the receiver’s range—or simply by holding still and hovering over a given spot within that range while the receiver tallies pings.

“The system works,” Bishop said, with an approving look at her younger colleague.

With only six months of data, Bishop and Reynolds are hard-pressed to list a long line of new discoveries, but already some trends have become clear. “The lingcod we captured at isolated sites stay put. Those in complex habitats move more, probably sensing the danger of predation. Some lingcod moved 4 to 6 kilometers away from their home pinnacle, but ultimately returned to it,” Reynolds said.

Seeing a fish fall off the radar for a few hours, the researchers try to correlate its trek with events in the region, such as the annual spring herring spawn (a welcome source of food for many Prince William Sound regulars). In this fashion, one fish at a time, Bishop and Reynolds are placing the lingcod into the larger ecological portrait of the sound and, from there, into the Pacific Ocean and the full tide of marine life.