Female antbirds jam their partners' songs when other females approach

The songs of birds certainly sound beautiful to our ears but listen closely and you'll hear a world of conflict and subterfuge. Take the Preuvian warbling antbird (Hypocnemis peruviana). Males and females live in pairs and they will defend their territories from other duos by singing beautifully coordinated duets. 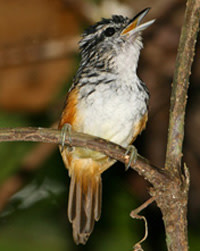 Theirs is a most melodious partnership but throw another female into the mix and the harmony breaks down. The duet turns into an acoustic battle - the female tries to jam the song of her partner with her own, so that the notes of his amorous solo fail to reach the ears of the intruder. The male in turn adjusts his song to avoid his mate's interference.

Joseph Tobias and Nathalie Sneddon uncovered this complicated sonic rivalry by recording 27 pairs of wild warbling antbirds in their natural environment in Peru. Males and females sing different tunes and their duets consist of a regular series of couplets - the male always leads and the female chimes in immediately after. These couplets require split-second timing. If she comes in any earlier, the female interferes with the male's song.

But she often does. The quicker she responds to his song, the greater the interference, and the more likely the male is to take counter-measures. If he's being sung over, the male abandons his current son and just begins a new one after the female finishes. In very rare situations, she jams him again, and the cycle continues. 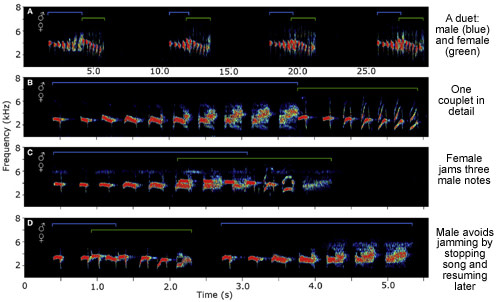 So male warbling antbirds have to compete with females for "acoustic windows" - moments of silence when they can best be heard. They may start the duets, but females have the ultimate say over their structure. And their decision to cooperate depends on whether they face another pair, which could oust both birds from their territory, or another female, who could steal away the male. Indeed, the female has reason to be paranoid - "divorce" rates in antbirds are rather high.

Tobais and Sneddon used hidden speakers to trick 17 pairs of antbirds into thinking they were facing intruders. When the speakers played the songs of rival pairs, the antbirds produced duets that were just as well-coordinated as their natural tunes, but far less complex - just the simple male-then-female pattern. But if the speakers blared the solo of another female, the resident lady jammed a greater proportion of her partner's notes than she did naturally. The duets became much less coordinated and far more complex, with both vocalists trying to outdo each other.

Antbirds are far from the only animals that perform precisely timed displays, but biologists have found it difficult to understand why such species synchronise so tightly. According to one school of thought, matching displays provide an honest indicator of the performers' skills. Inept individuals simply wouldn't be able to keep in time, and synchronised performances are more threatening and impressive.

Another camp says that performers match each other to avoid jamming, where one individual's display drowns out or masks the other's. One theory hinges on cooperation; the other involves conflict. In this case, both theories are clearly right, depending on the context of the song and its audience.

These sorts of conflicts are probably widespread in the animal kingdom and particularly so if the same signal is used for multiple ends - to defend territories and to attract mates.