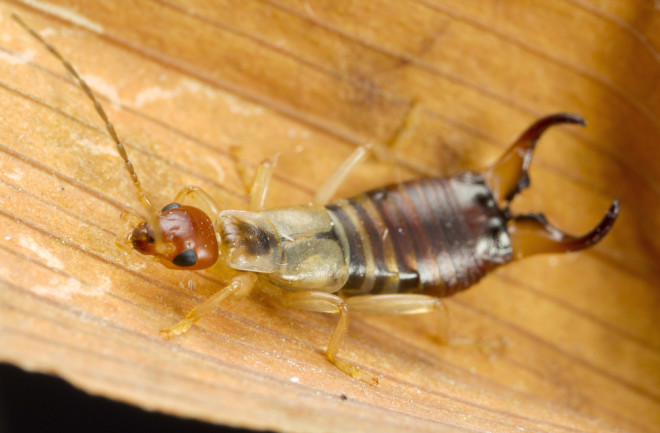 A European earwig (Credit: InsectWorld/Shutterstock) A steaming bowl of fresh feces isn’t a meal that will bring the family together over the holidays. But for many animals, fecal consumption is a way of life. The technical term for eating poo is coprophagy, from the Greek kopros for “dung”, and phagein, “to eat”. Though we most commonly associate coprophagy with domestic dogs, many other animals are known to indulge. Rabbits re-ingest their own droppings to extract extra nutrients; dung beetles have gone a step further and built a specialized diet around balls of manure; growth of American bullfrog tadpoles is enhanced by access to intestinal output; and consumption of fecal matter helps mediate the exchange of essential gut fauna in mice. Sharing feces might also bring earwig families closer together.

Feces are crawling with pathogens, which is why coprophagy is so counter-intuitive. It’s also why group-living animals have, in many instances, devised methods for keeping their nesting quarters clean and feces-free. Leaf-cutter ants are a prime example, with their elaborate waste management systems. Such sanitation behaviors are believed to have been a necessary step in the emergence of group living and sociality. European earwigs sit at the opposite extreme, actually lining their nests with feces in addition to consuming them. Their affinity for excrement is surprising given that earwigs are somewhat social (or subsocial) — not to the same degree as leaf-cutting ants, but they do often take up residence with their families on a temporary basis.

Leaf-cutter ants have an elaborate waste management system to keep their nests clean. (Credit: Salparadis/Shutterstock) The loose family associations of earwigs are reminiscent of the earliest transitions to sociality. But for this type of social shift to have set in motion, a family living arrangement must have offered some advantage over staying solitary. Parents likely sweetened the deal by providing young who stayed home with food and protection from predators. We can easily see incentives for young to stick with their parents in modern times — deprive a kitten or chick of its mother, and it’s all but doomed. Now turn back the evolutionary clock to the point in time where family living was a viable option, but not crucial to survival. Here we can start to get a sense of the pressures that spurred the adoption of this lifestyle. Family-oriented, feces-eating earwigs are an apt model system for studying these early days of social evolution.

While waste accumulation is believed to hamper the evolution of sociality, sibling competition over food is perhaps an even greater barrier. In their new study in Behavioral Ecology, a group of researchers led by Maximilian Körner of Johannes Gutenberg University of Mainz in Germany suggest that European earwigs have solved both of these problems quite efficiently by reaping survival benefits from consuming their siblings’ fecal matter. Previously, researchers studying sibling cooperation in European earwigs were intrigued when they noticed the nymphs were feasting on the feces of their family members, not only by picking them up from the ground, but also by nibbling them directly from their siblings’ anuses — yum.

It’s a Hard-knock Life for Nymphs

Convinced that the excrement must have some positive effect on developing nymphs, Körner’s group made up special diets for nymphs in the lab, consisting of varying amounts of sibling feces, mother feces, and non-fecal food. When the regular food was in short supply, nymphs that ate sibling feces had improved odds of surviving — even better than the ones that ate their mothers’ feces. “In earwigs, family life can get pretty rough: nymphs compete for maternal care and resources, and cannibalism occurs quite frequently.” says Körner.“It was therefore interesting to see that among all that, nymphs that may not get fed or are unable to feed from whatever the mother brought home can make do for a while — with the help of their siblings' feces.” Then, in a food choice experiment where the nymphs revealed that they preferred regular food to feces, they still always consumed a healthy helping of droppings if given the chance. To Körner, the fact that their taste for waste remains even when other options are available “strongly hints at benefits beyond mere nutrients.” These benefits may have proved great enough during the earliest incarnations of social evolution to maintain family ties. “Any effect that favors group maintenance over dispersal ultimately helps to drive the evolution of sociality,” he says. It’s when social life really takes off, and groups become large and permanent, that sanitation strategies become crucial to keep heaps of waste from building up.