Fear, Reward, and The Bottle: An Update to My Column on Neurogenetics 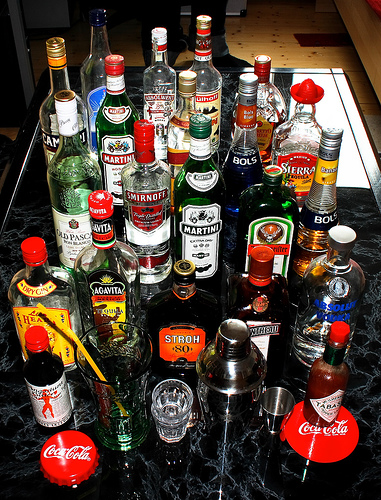 In May I wrote in Discover about a major experiment in neuroscience. Ahmad Hariri, a neuroscientist at Duke, is gathering lots of data from hundreds of college students--everything from genetic markers to psychological profiles to fMRI scans. He hopes that the Duke Neurogenetics Study, as he's dubbed it, will reveal some of the ways in which the variations in our genes influence our brain circuitry and, ultimately, our personality and behavior. Hariri plans to collect data from over 1000 people, but he and his colleagues are already starting to analyze the hundreds of students they've already examined to look for emerging patterns. In the open-access journal Biology of Mood and Anxiety Disorders, they've just published some of their first results. While the results are, of course, preliminary, they do offer an interesting look at the future of neuroscience. Rather than pointing to some particular gene or brain region to explain some feature of human behavior, neuroscientists are learning how to find patterns that emerge from several factors working together. For their new study, Hariri and his colleagues looked in particular at problem drinking. They hoped to find factors that predicted whether students would start imbibing worrisome amounts of alcohol. Other scientists have previously found evidence that a stressful event--the death of a parent, failing a class, and such--sometimes leads students to hit the bottle. But plenty of students endure these hardships and don't end up getting drunk so often. Hariri and his colleagues suspected that the difference might have to do with how our brains respond to both stress and alcohol. When they sifted through their data from 200 students, they found two factors helped predict whether a student was a problem drinker or not. One was how strongly their brains responded to rewards. Hariri and his colleagues tested this reward response by having students play a guessing game while having their brains scanned. They had to guess the value of a number on a card, and then they saw whether they got it right or not. Success brought a surge of blood to a region of the brain called the ventral striatum--a region that responds to many pleasures. Recovering alcoholics who see a picture of a bottle will experience a surge in the ventral striatum, for example. The surge was stronger in some students than others. Students who had a stronger surge in the ventral striatum had higher levels of problem drinking in the wake of stressful events. But that wasn't the whole story, Hariri found. There was one more requirement. In another test, he and his colleagues tested how people's brains responded to fearful images--pictures of scared faces, for example. Such sights usually trigger a surge of activity in a region called the amygdala. And some people have a stronger response there than others to the same picture. Hariri found that people with a strong reward response started drinking after a stressful event if they also had a weak response from the amygdala to fearful images. The suffering that comes from losing a job or being assaulted can lead people to seek solace through alcohol. Hariri's research suggests that the stronger a reward a person experiences from a drug like alcohol, the more they'll drink. But that's not the case if a high-reward person also has a high fear response in the amygdala. A person with a strong amygdala response may feel anxiety about the dangers of getting too drunk and back away from problem drinking. If people don't sense the threat so keenly, however, then they may have nothing standing in the way of taking in too much alcohol. The scientists found this three-way interaction between stress, reward, and threat when they looked at students who were problem drinkers at the time of the study, and they also found it when they followed up three months later and discovered some of their students had developed a new drinking problem. As with any study like this, we'll have to wait and see if it gets supported by replicated studies. Hariri himself will be able to run that sort of study when he has collected more data from other students. If it holds up, scientists may eventually be able to find gene variants that are associated with the high-reward low-threat brain. Some studies even have suggested that a single variant can produce both changes. Perhaps a report from a DNA-sequencing company might include a list of the variants that make some people more prone to drink in stressful situations. On the other hand, it's also possible that the problem drinking among the students came first, and led to their experiencing stressful events. Teasing apart all the strands will take some time. PS: For the data geeks, here's a figure from the paper. The brain in (A) shows the reward-related activity in the ventral striatum. B shows the amygdala's response to fear. The graphs show how likely people are to experience problem drinking after a stressful event. The left graph shows the response from people with a low reward response from the ventral striatum, and the graph to the right shows high-responders. In each graph, the scientists break out the high amygdala response (green line) and low (blue). The one line that stands out belongs to the high-reward, low-threat subjects. 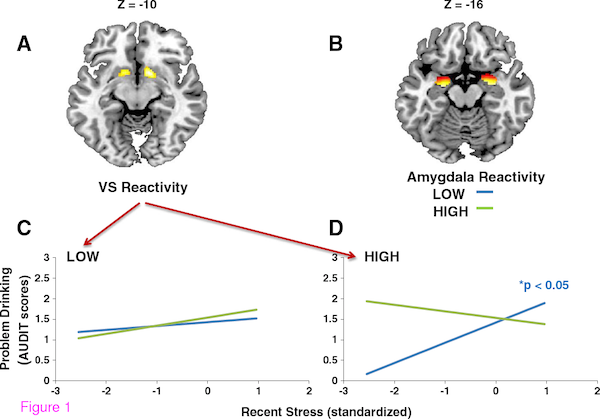