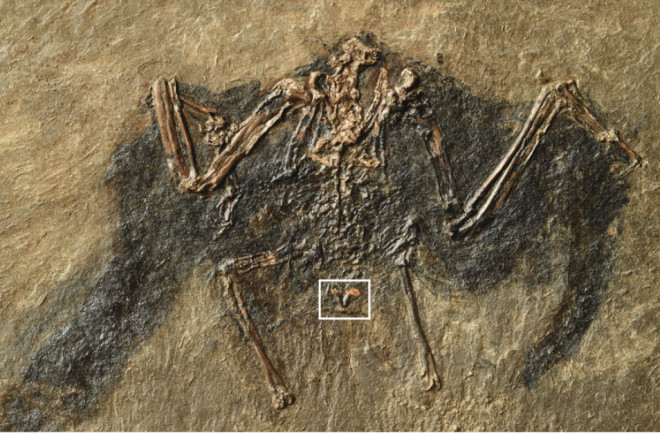 Researchers confirmed fatty tissues had been preserved in the preen gland (in box) of a 48-million-year-old bird fossil. (Credit O'Reilly et al 2017, doi:10.1098/rspb.2017.1050) It really is true: fat hangs around a long time whether you want it to or not. Okay, so we're not talking about stubborn love handles and saddlebags, but researchers have confirmed that fatty tissues were still identifiable in the partial fossil of a 48-million-year-old bird. The new research hints that similar soft tissues might be found in fossils sitting in museum archives around the world. Soft tissue preservation in fossils is rare but not unheard of. Earlier this year, researchers revealed a fantastic partial armored dinosaur, for example. Its skin was preserved so perfectly that the animal looked like it was sleeping rather than dead for more than 100 million years (well, the front half, anyway. The back end was missing). Aside from looking cool, preserved skin can reveal details about the animal far beyond what you might find in the typical fossil bone. Researchers have been able to determine, based on the soft tissues preserved in that armored dinosaur and others, that the animals used countershading – dark on top, light on the bottom — to camouflage themselves from predators. While skin, hair and feathers are the soft stuff these rare fossils are usually made of, researchers have thought that structures preserved in some bird fossils look an awful lot like uropygial glands. Also known as preen or oil glands, they sit near the base of the tail and secrete an oil that has, among other things, anti-bacterial properties. The oil is important in, you guessed it, preening: to keep birds looking glossy and, more importantly, those feathers in tip-top shape. Shake a Tail Feather No one had ever proven, however, that the things in bird fossils that looked like the fatty tissues of these glands were actually, yeah, the fatty tissues of the uropygial glands. Enter a new study published today in Proceedings of The Royal Society B: Biological Sciences. A team took minute samples from the partial fossil of a small bird believed to be an undescribed species — the specimen is missing some important parts, such as the skull and legs, so for now it's Bird Doe. The fossil was excavated from Germany's Messel Pit site, which has long been a gold mine for well-preserved fossils. Sampling what appeared to be the fossil's preen glands as well as its feathers, the researchers also took samples from the oil shale sediment in which it had been found for comparison. They also collected a number of fresh gland samples from birds that were probably not too happy about that. The team then processed the samples using pyrolysis gas chromatography-mass spectrometry which basically uses heat to break up complex chemical compounds into their most basic parts, which can then be identified and quantified. Once you know the elemental bits and how many you have of each, you can determine what the sampled compound as a whole is. And lo and behold, the profile of the gland-like fossil structure was very different than that of the feathers or sediment, but much more similar to the modern bird gland samples. Confirming the fossil structures of Bird Doe are indeed its preserved preen glands, and that the fatty tissues can still be distinguished on a molecular level, may not sound super sexy. Unless, of course, you're really into preen glands in which case hey, I don't judge. But it is impressive, both that the tissues could be preserved for that long and that the team could identify them. It gives paleontologists another way to study these extinct animals and preen I mean glean clues about their behavior.