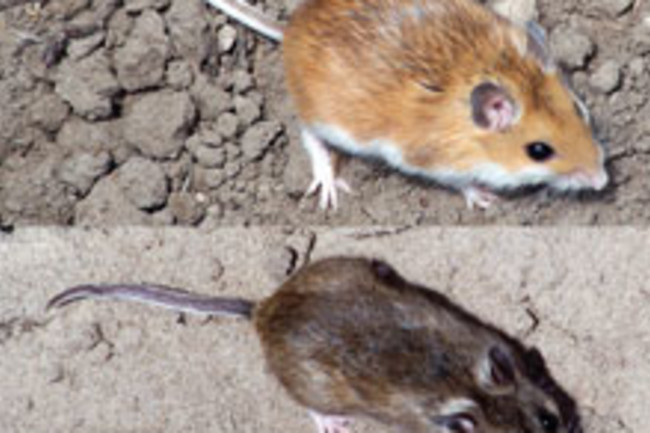 The pale-coated deer mouse that makes its home in Nebraska's Sand Hills prairie has become a poster-mouse for evolution, based on results of a study published in Science. The rodent typically has dark fur (bottom photo), but one Nebraska group of mice evolved to have lighter fur (top photo) after the Sand Hills formed 8,000 to 15,000 years ago. A lighter coat is advantageous because it allows the animal to blend in with its pale surroundings. But what's more amazing is that before the formation of the Sand Hills, the deer mouse didn't even possess the gene that controls coat color in the rodents. The gene, which is known as Agouti, first appeared in deer mice in the Sand Hills about 4,000 years ago; after that, a mutation occurred that gave rise to the mouse's sandy fur.

"The light gene wasn't in existence, so the mice had to "wait" until a particular mutation occurred and then selection had to act on that new mutation... It's a two part process. First the mutation has to occur and second, selection has to increase its frequency" [BBC News],