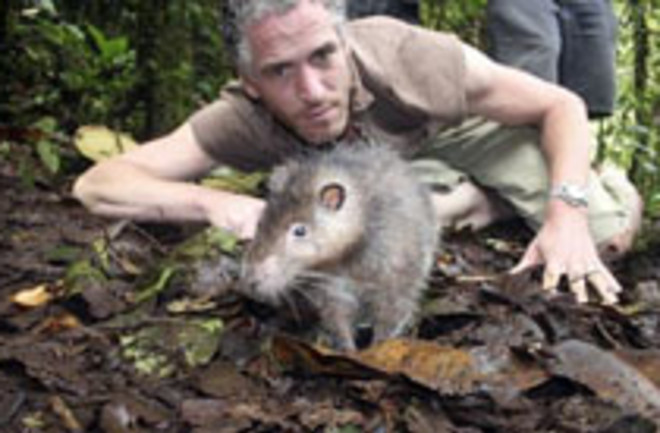 We folks here at Discoblog get very excited when we hear about the discovery of new animals like the psychedelic fish. But there’s really no place like Papua New Guinea for chance stumbling upon animals that were once mere storybook creations. On a recent six-week expedition, scientists from Oxford University, the London Zoo, and the Smithsonian Institution discovered 40 new species in a volcano that erupted 200,000 years ago. The notable finds include frogs with fangs and a Bosavi woolly rat, a rodent the size of a small cat—it’s 32.2 inches long and weighs 3.3 pounds. CNN reports:

"This is one of the world's largest rats. It's a true rat, the same kind you find in the city sewers," said Kristofer Helgen, a biologist from the Smithsonian National Museum of Natural History, who was part of the expedition team.

Fortunately, the animals in the crater of the volcano are protected from the local hunters since the humans can’t be bothered to hike down into its center. However, the forests around the animals are anything but safe: More than 25 percent of forests in Papua New Guinea have been destroyed or damaged in the past three decades. Related Content: DISCOVER: The Ancient Rat As Big As A Bull Discoblog: The Obama Plant