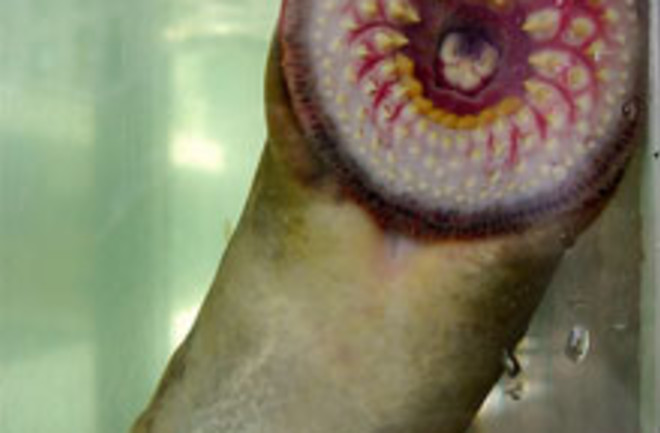 The trick to controlling invasive blood-sucking sea lampreys—sometimes known as vampire fish—may be a love pheromone, according to a new study. Researchers have designed a synthetic version of the male lamprey pheromone that ovulating female lampreys find irresistible, and could be used to lure them into traps. This would be the first instance of using pheromones to control non-insect pests. “There’s been extensive study of pheromones in animals and even in humans,” said lead researcher Weiming Li… “But most researchers have presumed that as animals get more complex, their behaviour is regulated in a more complex way, not by just one pheromone,” [BBC News].

When Li’s team placed traps laced with the synthetic pheromone in a stream, female lampreys swam eagerly towards the trap. Only a whiff of the pheromone was needed to attract females from hundreds of meters away, the researchers report in the Proceedings of the National Academy of Sciences. “The pheromone is expensive to synthesize… But only a very small amount is needed for it to work successfully. It’s very potent. Only a few hundred grams, less than a pound, would be used each year” [LiveScience] said Li, who discovered the natural lamprey pheromone in 2002. Currently, lampreys are controlled mainly by adding TFN, a compound that kills the larval stage, to freshwater streams where lampreys spawn. But there are environmental concerns about adding the chemical to streams, as well as the possibility that lampreys could develop resistance to TFN [LiveScience].

The sea lamprey’s vampire nickname comes from its taste for blood: Circular jaws lock on to another, larger fish, and a sharp tongue carves through its scales. From then on the lamprey feeds on the blood and body fluids of its temporary host, often killing it in the process [BBC News]. Each lamprey can consume up to 20 kilograms of fish in its lifetime. Lampreys are particularly pernicious pests because they can survive in both ocean and freshwater. Like salmon, adult lampreys return to freshwater to breed and die. But unlike salmon, which seek out the stream they were born in, lampreys appear willing to take any stream indicating a suitable breeding place; and perhaps pheromones play a role in identifying streams worth selecting [BBC News].

Lampreys were introduced into the Great Lakes during the building of canals in the 1800s. Far away from their natural marine predators, lampreys flourished in lakes and streams at the expense of native fish species. “It was one of the worst things to hit the Great Lakes in the history of European settlement,” said Marc Gaden from the Great Lakes Fishery Commission (GLFC), the body responsible for controlling the lamprey problem. “Before it, we had a thriving fishery largely dependent on native fish such as the lake trout… but by 1940 they had colonised thousands of streams and fishermen were beginning to see the devastation” [BBC News]. Li is already planning a study that would place pheromone traps in 20 streams that feed into the Great Lakes. What to do with all that trapped lamprey? Perhaps eat them. In France and Portugal, sea lamprey is considered a delicacy.