Eyeless Urchins "See" the Sea With Their Spines 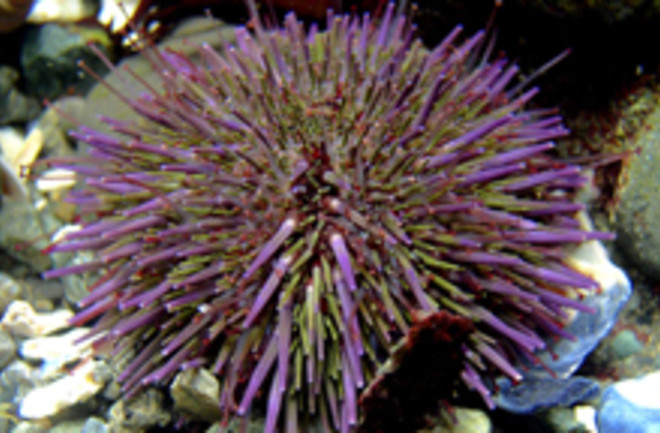 Oh, you. You think you’re pretty fancy, don’t you, with your matching pair of eyeballs, your precious optic nerve, your oh-so-sophisticated visual cortex. You think you’re so evolved. The sea urchins are not impressed. Though the round, spiny marine creatures have no actual visual organs, they do have light-sensitive proteins that help them “see” well enough to move around, find shelter and avoid predators (well, at least the slow ones). Biologists now think that a sea urchin’s entire body functions as one big compound eye, where photosensitive tissue inside the exoskeleton picks up light that’s filtered by the radiating spines. And the denser an urchin’s spines, the sharper its perception of its surroundings, a new study suggests. So who’s fancy now? Sönke Johnsen and his team at Duke University in Durham, N.C., tested the visual responses of Strongylocentrotus purpuratus, a large, purple Pacific urchin with an especially spiny exoskeleton. They placed individual urchins in the center of a tank with a dark target on one side, and they lit the tank from above. In under a minute, the urchins began to move relative to the target. Some inched toward the dark spot and others scooted away from it, but their trajectories were definitely deliberate—each urchin was tested four times with the spot in different parts of the tank, and each repeated its behavior every time. “Even though the group as a whole did not choose one direction relative to the target, they obviously responded to it,” the researchers wrote in The Journal of Experimental Biology. “This is analogous to a group of people each using their own compass to go a different direction.” According to Johnsen’s team, it’s possible that urchins who were attracted to the spot interpreted it as a cave to hide in, while the ones who fled treated it as a predator like an eel or a sea star. S. purpuratus could detect smaller targets than a previously tested species with sparser spines, suggesting to the researchers that the additional spines give it greater visual resolution. They say they’d need to test additional species to be sure. Okay, so they still can’t recognizefaces or appreciate the subtleties of a Van Gogh, but Johnsen and his colleagues say the urchins can see about as well as a horseshoe crab or chambered nautilus — and those guys have actual eyes. Not bad, right? At least one urchin species, by the way, can live up to 200 years, so don’t even think that you’ll win in a stare down.