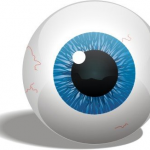 Metaphors are essential to writing about science. Even scientists themselves use metaphors all the time, drawing from their familiar experiences to describe the unfamiliar. Building proteins is known as translation, for example, because the sequences of DNA and proteins are akin to words written in different languages. The cell has to translate one language into another using--another metaphor--the genetic code. Metaphors can be powerful, but they can also trip us up if we mistake them for an equivalence. DNA isn't really a human language, for example. In my latest column for Discover, I take a look at another tricky metaphor: the eye as camera. Some scientists are actually making that metaphor real, by building video cameras that can let blind people see. As I point out, however, eyes are not cameras, and the differences are fascinating. They're also crucial to the future success in treating blindness with technology. Check it out.