Eye Reflections in Photos Can Reliably Identify Who's Behind the Lens 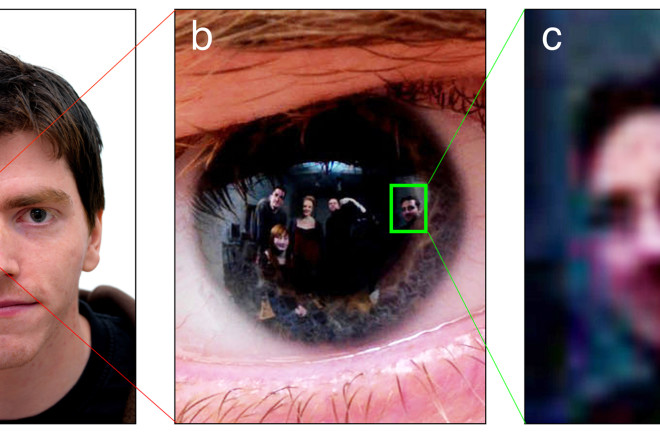 Cheese! Researchers zoom in on a bystander in the study. Credit: R. Jenkins and C. Kerr/PLOS One A person can learn a lot from looking deeply into someone's eyes---perhaps even enough to identify suspects of a crime. Zooming in on a person's cornea in a high-resolution photo can reveal an astounding degree of detail of what was behind the camera, new research shows. The technique could eventually help identify criminal suspects.

It's All in the Eyes

To test how effective a mirror the cornea was, researchers took passport-style photos of college students in the lab. Bystanders were placed a few feet away, facing the subjects, while the photos were being taken. When the researchers zoomed in on the subjects' eyes in the photos, they were able to see pixelated versions of the bystanders' faces. The images were only about 30 pixels wide and 50 pixels tall, on average. That means the reflection of a bystander's face was 300,000 times smaller than the face of the person being photographed.

Still, the scientists found that study participants could correctly identify most of those tiny faces. When the bystanders were strangers, participants could correctly match a pixelated photo with a higher-quality headshot 71 percent of the time. When the reflected faces were people the participants knew, the rate of successful identification jumped to 84 percent. In a paper published in PLOS One, the researchers conclude that humans have strong facial recognition skills, even with super-pixelated photos. And they think this skill, combined with the high resolution of modern day cameras, could one day be used to identify suspects in crimes where photos tend to be taken, such as hostage situations or instances of child sex abuse.

Such a scenario may be a ways off, though. The study setup wasn't particularly realistic---researchers used professional lighting, snapped photos with a high-end, 39-megapixel camera, and strategically arranged bystanders near the subjects. (For comparison, the camera on an iPhone 5 is 8 megapixels.) Crime scenes rarely have such ideal photographic conditions. But with the rate at which camera quality is improving (not to mention becoming more affordable), the researchers say it's only a matter of time before people are walking around with 39 megapixel cameras on their cell phones, which would make the scenario much more feasible. By combining the images from both eyes, researchers think they could eventually come up with 3-D images from the reflections as well.