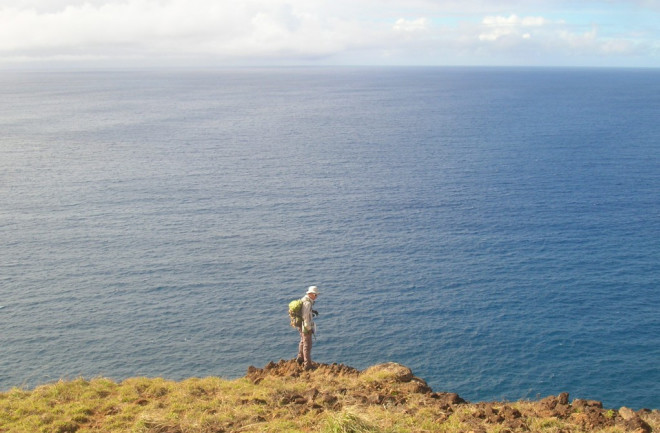 Jut Wynne at Rano Kao Volcano conducting reconnaissance for the cliff work to take place in August. (Credit: Rafael Rodriguez Brizuela) On Easter Island, isolated in the middle of the vast Pacific Ocean, ten species of near microscopic insects are all that remain of the island's native species — at least for now. Hidden in volcanic caves that dot the island, the endemic insects of Rapa Nui eke out an existence in an increasingly imperiled habitat. Their ancestral homes, fragile gardens of moss and ferns, are endangered by tourists flooding into the tiny island, and hordes of invasive species threaten to crowd them out. The island may have been immortalized by its iconic Moai, monolithic stone statues standing some 40 feet tall, but its most important inhabitants are almost too small to be seen.

The story of environmental destruction on Rapa Nui begins when humans arrived on the island. Polynesian sailors, carried over the waves in giant canoes, made landfall sometime between 800 and 1200 AD. They built a civilization on the verdant island, utilizing the tropical forests for boats and building materials, farming the virgin earth and fishing the bountiful seas. The population soon swelled, likely to around 15,000 inhabitants at its peak in the 17th century, but the population fell to around two or three thousand people by the time Europeans first arrived in 1722.

Wynne and Parque Nacional Rapa Nui Park Guard Sergio Manuheuroroa Teave returning to Hanga Roa from Mataveri. (Credit: Rafael Rodriguez Brizuela) The ecological shift brought on by human activity may have had devastating consequences for the species that had called the island home for millennia, and which were adapted to a specific kind of environment. What was once palm-dominated scrub forest became a grassland, erasing the natural habitat of dozens of species. The lost species included five kinds of land birds, sea mammals, insects and a type of giant palm tree called Paschalococos disperta, or the Easter Island Palm.

Wynne searching for insects hidden in a fern-moss garden within a cave in the Roiho Sector, Rapa Nui. (Credit: Katherine Moreira) "Ecosystems don't collapse, they shift from one steady state to another, and that’s simply what happened here on Rapa Nui. What caused that shift was a very fragile, fire-intolerant ecosystem and the arrival of humans timed inauspiciously with a extended drought period," says Jut Wynne, an assistant research professor in the Department of Biological Sciences and the Merriam-Powell Center for Environmental Research at Northern Arizona University. "And when that happened, it put a big strain on the ecosystem, we lost a lot of endemic plants in favor of a more homogenous environment, and we lost a lot of endemic animals ... the only animals terrestrial in origin that are remaining on Easter Island are insects, and they are fleetingly few."

Race to Save Unique Species

The island now hosts species from the mainland and other places, as well as hundreds of sheep and horses, as well as goats, domesticated descendants of the livestock owned by ranchers who worked the island in the early 1900s. Hidden under their feet, however, are some of the last true natives of Rapa Nui — ten species of insects endemic to the island. Wynne is visiting the island this summer to continue a nearly decade-long project of studying, classifying and hopefully conserving the insects.

Searching cliff faces for native insects along the southern coast of Poike Volcano. (Credit: Rafael Rodriguez Brizuela) An ecologist who has worked in places as far-flung as the Atacama Desert, Scotland and Mexico, Wynne first visited Rapa Nui in 2008, following a childhood dream of seeing the island. He would return that year to conduct a baseline study looking at one cave, which provided a basis for subsequent expeditions. Trips in 2009 and 2011 followed, during which he sampled over a dozen more caves and identified eight new species endemic to the island, bringing the total to ten. This summer, supported by a Fulbright fellowship, he hopes to expand his search to the cliffs, lakes and coast lines of the island, in addition to ramping up conservation efforts among the populace.

Hawaiioscia rapui (Credit: Jut Wynne) The 10 species he's discovered likely represent only a portion of what was once on the island. Records indicate that many more once crawled across the island, but were wiped out by changes to the ecosystem and invasive species. The remaining insects have likely all retreated underground, where conditions likely reflect the Rapa Nui ecosystem that existed before humans arrived. They live chiefly in gardens of fern and moss gardens that provide the cool, damp surroundings they prefer. These caves, scientists believe, may be the only places where these species exist.

Two species of native fern found within the entrance of an unexplored cave on Terevaka Volcano, on the northern tip of Rapa Nui. (Credit: Jut Wynne/Northern Arizona University) So far, Wynne has discovered seven species of springtail, tiny insects whose defining feature is a spring-loaded tail that flips them into the air and away from danger — a built-in ejector seat. He has also found two isopod species, popularly known as "roly-polys", and one species of book louse. While he has ample evidence that other species existed in the past, his upcoming research could uncover more.

Conservation as Important as Discovery

Preserving the insects that he's discovered is fast becoming an equally important task. Roughly 100,000 tourists came through Rapa Nui last year, a surfeit of pedestrians for an island totaling only 63 square miles. Much of the island is designated as a National Park, but current strategies to preserve vulnerable areas and restrict foot traffic have not offered adequate protection for the insects. Wynne says tourists regularly walk through some of the insects' habitats, completely oblivious to the ramifications of their behavior.

Lepidocyrtus olena (Credit: Jut Wynne) Even studying the insects in their natural cave environment presents a delicate balance between scientific enlightenment and harmful intrusion. "One thing I cannot emphasize enough is that every time we enter a cave there are impacts associated with that," says Wynne. "We’re aware that researchers have impacts just like anyone else entering a cave has impacts, and we do everything we can to minimize those impacts. We only go into the cave if absolutely necessary and only if we have a good reason for going into the cave."

Mataveri cliff cave, one of the largest cave entrances on Rapa Nui, located on the western coast. (Credit: Jut Wynne, Northern Arizona University) Invasive species present another threat to the endemic insects. American cockroaches, millipedes and others likely hitched rides on ornamental plants, and they now pervade the island, threatening to crowd out, and eat up, the natives. "These insects are in a constant struggle, in competition [with] and being predated upon by an overwhelmingly significant non-native arthropod or insect community," says Wynne. And because of that we believe that most of the insects on the island are indeed in danger of extinction." He hopes that the future may not be as bleak as the past on Rapa Nui, however. Wynne is a proactive conservationist on the island, working with the park system, the community and the government to increase awareness of the island's unique, yet invisible treasures. His efforts have met with some success already: the park has closed roads to automobiles and buses, reducing traffic in vital areas, and the park is working on a cave management system to monitor the insects' habitat. Wynne says that even small measures such as roping off areas where the insects are likely to be and putting up signs could have a large impact.

The economic incentives that draw tourism to the island make fully protecting the caves difficult, however. The island depends largely on revenue from visitors, and the beautiful vistas and caves filled with indigenous art make for a potent lure. Sebastián Yancovic Pakarati, an indigenous resident and expert on Rapa Nui's natural heritage, says that the island must develop a plan to better protect its natural and cultural treasures before opening the floodgates of tourism. He advocates the implementation of a system for monitoring the caves and other sites, as well as better infrastructure and oversight of tourism activities. He is heartened by the fact that residents seem willing to play a role in the ongoing protection of their island and its resources. "The new generations want to pay more attention, not just to conserving and preserving the Moai and the cultural legacy of our ancestors, but we also want to place a major emphasis on nature's heritage and biodiversity, both on land and in the sea," said Pakarati, who serves on the Advisory Council of National Monuments, in a translated email exchange. "This is where we have real potential for growth, as well as the responsibility of taking charge of our own island."

Rapanui naturalist Sebastian Yancovic Pakarati collects insects on Rapa Nui. This cave contains one of the most important native habitats on the island. To date, fern-moss gardens have yielded at least 10 species native to the island (eight of these were new to science). (Credit: Nicholas Glover) With the combination of newfound support and greater oversight, he is hopeful that these endangered areas can be preserved. "Fortunately, work has begun this year on a proposal for conservation of the caves in the area that has the highest concentration of them, called Roiho," says Pakarati. "We hope this initiative can help with the conservation and preservation of the location, and eventually the rest of the island."