Extinct Tasmanian Tiger May Have Screwed Itself by Inbreeding 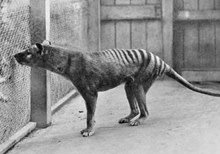 The Tasmanian tiger may have been threatened by inbreeding before humans hunted the marsupial into extinction, a new genetic analysis suggests. The last captive tiger died at a Tasmanian zoo in 1936 after a decades-long effort by farmers and hunters to kill the creatures and collect a government bounty, but the new study suggests that the tigers' lack of genetic diversity left them particularly vulnerable to the human onslaught and outbreaks of disease.

“It’s looking like the thylacines were sort of on their last legs,” says Webb Miller [Science News]

, one of the coauthors. Researchers sequenced the mitochondrial DNA of two Tasmanian tigers, more properly known as thylacines, from tissue samples preserved at museums in Sweden and the United States. And while the researchers' main goal was to investigate the roots of the thylacine's extinction, they acknowledge that having a complete genome at their disposal is sure to prompt talk of cloning. Says Miller:

"Our goal is to learn how to prevent endangered species from going extinct.... I want to learn as much as I can about why large mammals become extinct because all my friends are large mammals," Professor Miller added. "However, I am expecting that publication of this paper also will reinvigorate discussions about possibly bringing the extinct Tasmanian tiger back to life" [BBC News].

Some scientists think that the thylacine would be one of the easiest extinct animals to resurrect, as it died out recently and several well-preserved specimens exist in museums. As reported in the journal Genome Research, when the researchers compared the two specimens' genomes they found only five differences in a sequence of 15,492 nucleotides. The researchers note that a

distemper-like disease swept through wild and zoo thylacine populations from 1900 to 1910. A lack of genetic diversity could have left the animals susceptible to the disease [Science News].

Then the relentless guns of the hunters may have finished the species off. While a link between extinction and poor genetic diversity hasn't been definitely proven, researchers say the new findings have immediate relevance for the battle to save endangered species. In particular, the Tasmanian devil is severely threatened by a facial cancer that has already wiped out about half the population, and early research indicates that the devils have poor genetic diversity as well. Says study coauthor Stephan Schuster:

"We're trying to find the genetic differences between them, only this time around we would like to use this information for pedigree selection.... We will tell the breeding efforts already under way in Australia which animals they have to breed to have the maximum success in stabilising the population, and to breed the most genetic diversity possible" [BBC News].

Related Content: DISCOVER: Bringing the Tasmanian Tiger Back From the Dead 80beats: Tasmanian Superdevil, Hope of the Species, Is All Too Mortal 80beats: One Quarter of World’s Mammals Are Threatened With ExtinctionImage: Wikimedia Commons