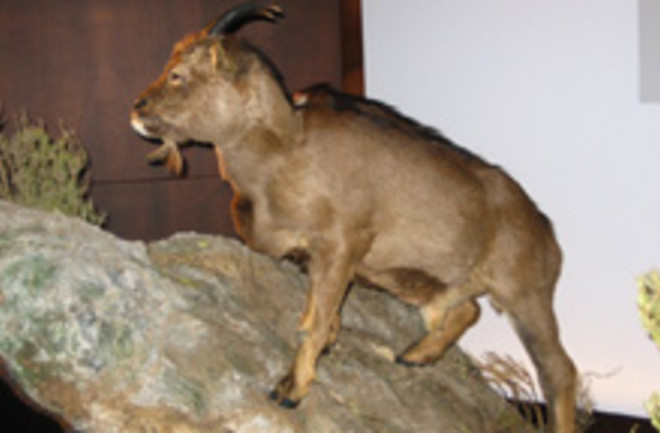 Say you're a goat stuck on a Mediterranean island with scarce food and no way to leave. How do you survive? The strange species Myotragus answered that question by getting small, and, most unusually, adopting the cold-bloodedness normally seen in reptiles. In a paper in this week's Proceedings of the National Academy of Sciences, researchers say that the now-extinct dwarf goat managed to survive thousands of years of resource scarcity by adjusting its metabolism to match how much food was available.

The discovery marks the first time scientists have seen this cold-blooded survival strategy in mammals. The surprising skill likely allowed the goats to endure potentially fatal periods of scarcity on what is now the Spanish island of Majorca [National Geographic News]

. Paleontologists figured out this oddball habit of Myotragus by analyzing its bones, as well as those of reptiles that lived in the same time and place.

The bones of cold-blooded reptiles, such as the crocodiles, have parallel growth lines that cyclically come to a halt before starting up again.... Similar to tree rings, these lines match the growth cycles of animals. Warm-blooded species, on the other hand, exhibit uninterrupted, fast bone growth [Discovery News]

. Taking on cold-blooded characteristics allowed Myotragus to survive, but it came at a price. The goats were born only as big as a large rat, and spent years growing to adult size, which was just more than a foot and a half in height. They probably had small brains and small eyes, and moved about sluggishly to save energy. Coauthor Meike Köhler says those factors spelled doom when a new threat reached the island: people.

"The postcranial skeleton indicates that this animal was not able to run, jump, or move fast around, and [would have been] easy prey," [National Geographic News]

, Köhler says. Related Content: DISCOVER: The Biggest Dwarf Ever (For island living, size does matter.) Discoblog: Are Wind Turbines Killing Innocent Goats? 80beats: How Did Dinosaurs Get So Big? Maybe Because They Were Couch Potatoes