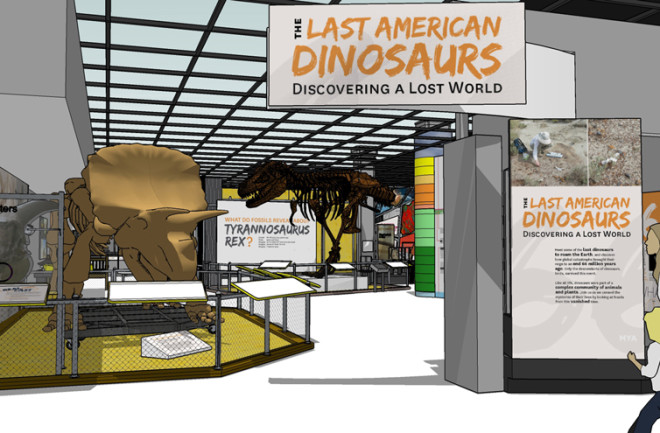 Designs for the new exhibit, which replaces the Smithsonian's fossil hall while it's closed for renovation. | Smithsonian Institution

With the Smithsonian’s iconic fossil hall closed for renovations until 2019, what’s a dino lover to do in the nation’s capital?

Well, you could spend some quality time in the twilight of T. rex’s reign. Last American Dinosaurs gives visitors the chance to immerse themselves in both a late Cretaceous ecosystem and the fieldwork of paleontologists today.

A Triceratops previously in the fossil hall (bottom) stars in the new exhibit. | Chip Clark/Smithsonian Institution

The exhibit re-creates North Dakota’s Hell Creek formation, one of the richest dino digs ever found, as it was 66 million years ago: a swampy lowland teeming with life, including some of our most famous dinosaurs, such as Triceratops and T. rex. Multimedia stations explain how scientists determined the location’s flora and fauna, as well as its climate and geology. Opens Nov. 25.

[This article originally appeared in print as "The End of an Era."]