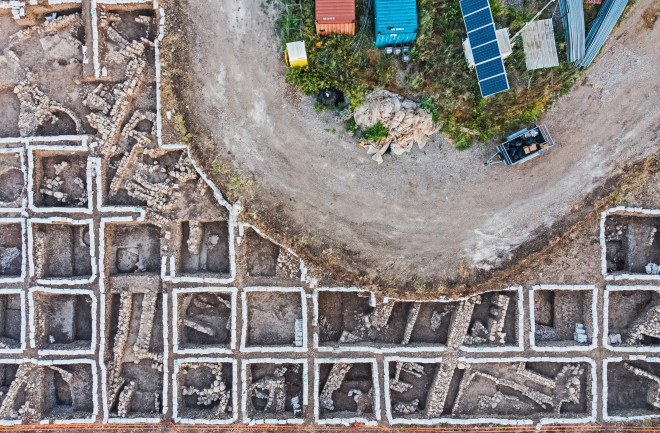 Nine thousand years ago — a couple of millennia after the first humble farming villages appeared in the Middle East — Motza was a town ahead of its time, a vanguard of urban life. Home to thousands, the roughly 80-acre site was about 10 to 100 times larger than other settlements of the day.

“Mega-huge,” says Hamoudi Khalaily, who co-led excavations at the site, which nestles between olive and dun-colored hills in present-day Israel.

In July, after 16 months of digging, the Israel Antiquities Authority (IAA) team unveiled Motza’s grandeur. The town was a dense hub of workshops, public halls and private homes linked by roads and alleys. Evidence of art and trade was everywhere, including bountiful artifacts such as handcrafted jewelry, Red Sea shells and Anatolian volcanic glass.

“You get the big full package, the big full town with all of those luxuries, organized street systems, et cetera,” says Omry Barzilai, head of archaeological research at IAA.

Also found were several hundred human burials beneath homes throughout the settlement, similar to other sites of the period.

The town’s scale surprised even team members. Researchers had known some early farmers inhabited the area since scattered flint tools, distinctive of the era, surfaced in the 20th century. But they didn’t expect much: The region was thought to be mostly abandoned during this part of the Neolithic. The IAA only probed deeper because a highway was about to be built over Motza.

Preliminary pits in 2015 confirmed buildings that were about 9,000 years old just a couple of feet below the surface. But it wasn’t until late 2018, eight months into full-scale excavations, that it became clear “we are dealing with one of the largest sites in the Middle East,” Khalaily says.

Archaeologists unearthed about 300 human burials under plaster floors, in courtyards and between walls. Skeletons were curled on their sides, knees tightly tucked, suggesting the bodies had been bound. Some were missing heads. The skulls may have been removed and covered in plaster, as was the custom at other sites in the region. (Credit: E. Marco/Israel Antiquities Authority)

Usually, archaeologists just dig portions of a site, in order to leave remains for future researchers. But because Motza was destined for development, the team sought to excavate its entirety, resulting in a nearly complete picture of life in the New York City of the Neolithic. In excavation layers closer to the surface, the team found far fewer buildings and artifacts, suggesting the settlement peaked and then dwindled.

Analysis of the finds will continue for years, potentially explaining what caused the mega-site to boom and fade. Barzilai hypothesizes population growth outpaced resources and social organization. “Maybe it was pushed to the limit,” he says.

More From Discover
Technology
Text-To-Image AI: Powerful, Easy-To-Use Technology For Making Art – And Fakes
Planet Earth
What Coffee Means to 6 Different Countries
Mind
Nostalgia and Thinking About the Future Can Be Good For You
Health
Could COVID-19 Be Changing Who We Are?
The Sciences
Was Nefertiti Egypt’s Leading Lady Before King Tut?
Planet Earth
These 5 Animals Trip on Psychedelic and Psychoactive Drugs, Too
Recommendations From Our Store
My Science ShopDiscover STEM Kits
My Science ShopDiscover 2022 Calendar
My Science ShopStrange Science
My Science ShopElements Flashcards
Shop Now
Stay Curious
Join
Our List