In 2004, evolution itself served as a witness for the prosecution in the case of the State of Washington versus Anthony Eugene Whitfield. Whitfield contracted HIV in an Oklahoma prison, and first learned about his infection in 1992. After his release in 1995, he had more than a thousand sexual encounters with 17 different women, even fathering children with three of them. He rarely wore a condom, never told any of his partners about his infection and flatly denied it when asked. However, Whitfield did confess to various people that if he had HIV, he would give it to as many people as possible. He got his wish – five of his 17 partners became HIV-positive. Whitfield was finally arrested in 2004 and convicted on 17 counts of first-degree assault with sexual motivation, among other offences. His total sentence came to 178 years and a month. To demonstrate Whitfield’s guilt, the prosecution had to show that he had wilfully exposed women to HIV, that his five HIV-positive partners contracted their infections from him. Fortunately, David Hillisfrom the University of Texas and Michael Metzker from Baylor College of Medicine knew exactly how to do that. They had evolutionary biology on their side. Hillis and Metzker knew that HIV is a hotbed of evolution. The bodies of HIV carriers produce around a billion new virus particles every day, and their genomes change and shuffle at furious speeds. But when infections pass from one person to another, this viral variety plummets. Thousands of genetically distinct viruses might jump into a new host, but usually, only one of these managed to gain a foothold and set up a new infection. Every time it moves from host to host, HIV passes through a genetic bottleneck and that provides a massive clue about who passed an infection to whom. Armed with this knowledge, Hillis and Metzker analysed HIV genes from six anonymised blood samples – one from Whitfield and five from the women he allegedly infected. They had no way of knowing which was which. The genes revealed that the viruses were all closely related to each other, and more so than to viruses from other HIV-positive people in the local area. Using these sequences, Hillis and Metzker constructed a family tree for the viral genes (a ‘phylogeny’), to show their evolutionary relationships and, more importantly, to work out which sequences came first. The tree was damning – one group of viruses was clearly the ancestor of at least four of the others, and probably the fifth. The owner of these viruses, known only as ‘WA04cd’, must have been the source of the related infections. Once the study was complete, the prosecution revealed that the identity of this mystery carrier was none other than Anthony Eugene Whitfield. Once the defense saw the evidence, Whitfield admitted to being the source of the infections, 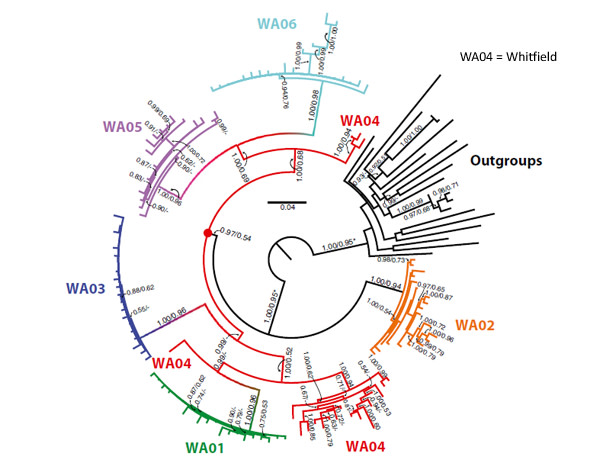 Whitfield’s case is just the tip of the iceberg. Similar analyses helped to trace the source of American anthrax attacks earlier this decade. And evolutionary trees have been presented as evidence in a number of different trials around the world, from the USA to France to Australia, all involving HIV infections. In 1992, a similar tree helped to show that a Florida dentist had infected several of his patients with the virus. HIV phylogenies have featured in cases involving a French nurse, an American surgeon, a British obstetrician/gynaecologist and a Swedish rapist. Hillis and Metzker first became involved in this field in 1998 as expert witnesses in the case of Richard Schmidt, a doctor who deliberately infected his ex-girlfriend with blood taken from one of his patients. Schmidt’s case set three important events in motion. For a start, it was the first time that phylogenies had been admitted in a US criminal case and set a precedent for later use. Hillis and Metzker even took part in the relevant ‘Daubert hearings’, which determine whether a technique can be admissible as evidence. Secondly, the blood samples weren’t anonymised, so the team knew the identities of everyone involved at the start of their investigation. Without such ‘blinding’, it’s possible that the researchers’ own biases could affect the results of their analysis. It was a mistake that the duo wouldn’t make again. Perhaps most importantly, Schmidt’s case received a lot of coverage, and because of that, Metzker became involved in a third case, involving a man called Philippe Padieu. Described as both a “modern-day Casanova” and a “narcissistic predator”, Padieu, like Whitfield, knew that he had HIV but never disclosed that fact to the many women he dated. In the end, he infected at least six women, one of whom happened to read an article about Metzker’s previous work. As in the Whitfield case, Metzker performed his analysis with blinded samples and as before, he found that all of them were related to each other, and that one was clearly the source of the others. That sample belonged to Padieu, who was convicted on six counts of aggravated assault with a deadly weapon and sentenced to 250 years in prison [update - served concurrently, so a maximum of 45, and he could be out in 20 - Ed]. 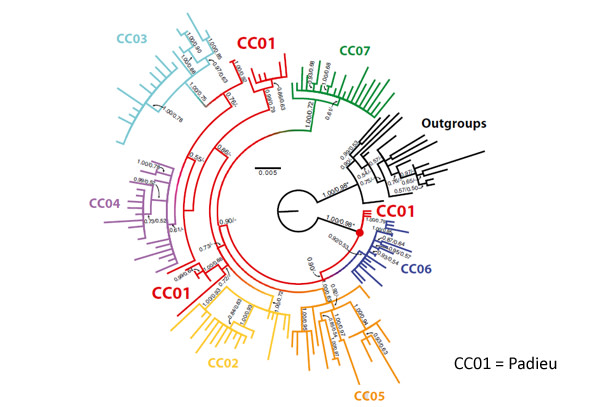 In both the Whitfield and Padieu trials, the evolutionary trees only formed part of the evidence used by the prosecution. The usual issues of means, motive and opportunity were all considered too, and the evolutionary evidence played a supporting role. That’s as it should be: David Foran, Director of the Forensic Science Program at Michigan State University, says “The analyses do not ‘prove’ anything, they simply support a hypothesis [that the infection was more likely to have come from the suspect]. The authors are generally clear on that point.”

Foran says that the methods used are sound and standard, although he would have liked to see an actual error rate. Hillis describes the technique as “highly accurate” but says that the results are nonetheless “statistical estimates” that depend on a lot of assumptions. They can’t crack a case on their own.

They also have to be used very carefully. For a start, you need to set out with a clear hypothesis to test. “It would be inappropriate, for example, to simply look for close matches among an open database of HIV sequences,” says Hillis, because you might miss out go-betweens in a chain of infection – people who passed the virus between those involved in a case.

Thomas Leitner, who also studies HIV evolution at Sweden’s Karolinska Institute, agrees. He says, “If we had yearly samples from all infected HIV persons world wide, then we could probably do careful investigations of who infected whom and when. But we don't have such samples, so our investigations become statistical, model-dependent... and thus we must always put in caveats about potentially missing links.”

The technique is also time-sensitive. HIV evolves so rapidly that over time, it could become very hard to link one person’s viruses to another’s, even if the former did infect the latter. The relevant strains might have been killed off by the immune system, or mingled with other strains. This means that a positive result can identify a culprit, as in the Whitfield and Padieu cases, but a negative result wouldn’t have exonerated them.

As a final caveat, Hillis says that there are ethical issues around the use of HIV tests in a legal setting. The big question is whether you charge people who deliberately infect others with HIV under general criminal laws, or under laws that are specific to HIV. All over the world, the latter approach – the so-called criminalisation of HIV - has been controversial, and touted as a big setback for both public health and human rights. It risks stigmatising people with HIV (even further than they already are) and make it harder to test people for the virus. “Why would you want to get tested if you then may become accused of transmitting? It's a difficult balance involving legal issues as well as public health,” says Leitner.

Nonetheless, bearing in mind these potential pitfalls, it’s clear that mapping the evolution of HIV can have a place in the courtroom. All of this is only possible because HIV evolves at tremendous speed, and because we understand that. This dynamic nature is a curse when it comes to designing cures and vaccines, but it’s essential for working out how the virus is transmitted from person to person. It is ironic that in a country where evolution itself often seems to beput on trial, that an application of this most powerful of ideas could find a use in the courtroom.

More on HIV: Genetic study shows how HIV controllers get their groove