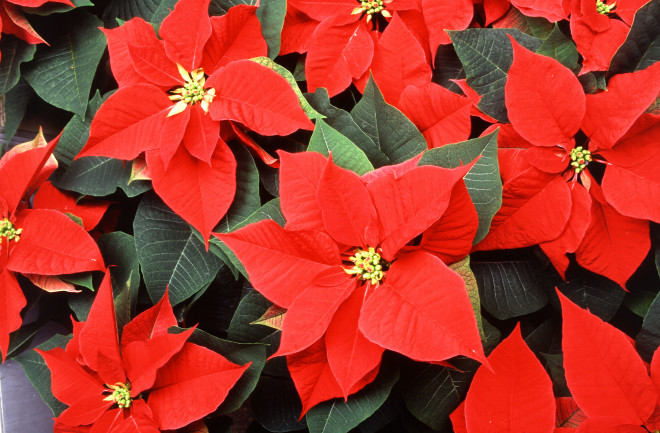 Poinsettias are a holiday icon. Their crimson colors are so commonplace this time of year that they practically blend into the background. And once the holidays are over, they'll disappear like so many Christmas trees.

But these seemingly boring flowers actually hide a fascinating history. Poinsettias owe their holiday prevalence to some weird quirks of evolution — and one clever Southern California entrepreneur.

The poinsettia has been tied to Christmas for centuries, with the tradition starting not long after Catholicism reached the new world. There are roughly 100 poinsettia species native to Central America, and some of these flowering shrubs can grow more than 10 feet tall.

Europeans saw religious symbolism in these blood-red flowers that bloomed around the winter solstice. They weren’t the first, either; Aztecs also used poinsettias in their ceremonies. But those red flowers aren’t actually flowers at all. They’re leaves.

To explain, let’s take a quick dive into the evolutionary history of flowers. Some 90 percent of modern land plants are angiosperms — basically, they flower. And scientists think all those flowers descended from one common ancestor. Earlier this year, researchers announced that the first bloom likely happened some 140 million years ago.

Back then, as today, flowers had the same basic components. There’s the stamen — the plant’s pollen-producing organ, which is housed in the ovary. The petals protect those organs and attract pollinators to help the plant reproduce. Below the flower, you’ll find support leaves called the sepal and the bract. The magnificent reds you see from poinsettias are actually the bract.

The bract leaves help prop up the olive flower in this USDA handbook illustration. (Credit: USDA)

Over time, evolution has taken flowers down many routes. And that’s where we get back to the poinsettia. Its bract evolved bright Christmas hues — among other colors — to attract pollinators. And its real petals shrunk until they were lost to evolutionary history.

You can see this for yourself if you take a close look at the poinsettias in your home or workplace. The flower is actually a tiny green or yellow structure that looks more like a stamen. After the flower’s pollen is gone — post Christmas — the bracts fall off, leaving poinsettias looking rather drab until next winter.

But evolving giant red bracts alone wouldn’t have been enough to make poinsettias a holiday tradition. They needed to flower at Christmas. Many plants die back as the nights grow longer ahead of the winter solstice. But that same darkness is the exact thing that makes poinsettias’ bracts change from boring green to Christmas crimson.

The process is called photoperiodism. Poinsettias don’t turn red until they’ve had at least five days with 12 hours of darkness. That’s a lesson learned by anyone who’s tried to keep a poinsettia for next Christmas — they need special care to flower again.

Our final history lesson reveals how these evolutionary quirks made poinsettias a holiday season mainstay. Back in the 1800s, Joel Roberts Poinsett, a botanist and the first American ambassador to Mexico, introduced the plants to the U.S. But it took a California entrepreneur named Paul Ecke and his family to turn them into the most commonly sold potted plant in the country.

Nearly a century ago, Ecke figured out how to grow poinsettias as an indoor potted plant — his business grew until it was selling them around the country. And in the 1960s, under the leadership of his son, Paul Ecke Jr., their company created a hybrid that would bloom for weeks instead of days.

Then Ecke Jr. cunningly got his flowers into Christmas-themed magazine photo shoots and TV show backdrops until the public saw poinsettias as a standard symbol of the holidays. By the time Paul Ecke III sold the family business in 2012, their company controlled half of the worldwide poinsettia market — an empire built on evolutionary and human resourcefulness.