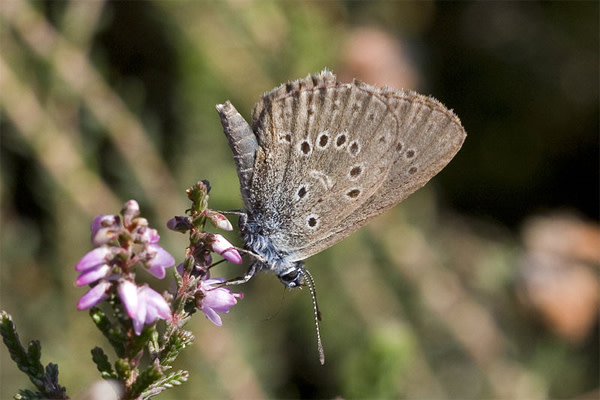 In the meadows of Europe, colonies of industrious team-workers are being manipulated by a master slacker. The layabout in question is the Alcon blue butterfly

(Maculinea alcon) a large and beautiful summer visitor. Its victims are two species of red ants

, Myrmica rubra and Myrmica ruginodis. The Alcon blue is a ‘brood parasite’

– the insect world’s equivalent of the cuckoo. David Nash

and European colleagues found that its caterpillars are coated in chemicals that smell very similar to those used by the two species it uses as hosts. To ants, these chemicals are badges of identity and the caterpillars smell so familiar that the ants adopt them and raise them as their own. The more exacting the caterpillar’s chemicals, the higher its chances of being adopted. The alien larvae are bad news for the colony, for the ants fawn over them at the expense of their own young, which risk starvation. If a small nest takes in even a few caterpillars, it has more than a 50% chance of having no brood of its own. That puts pressure on the ants to fight back and Nash realised that the two species provide a marvellous case study for studying evolutionary arms races

. Theory predicts that if the parasites are common enough, they should be caught in an ongoing battle with their host, evolving to become more sophisticated mimics, while the ants evolve to become more discriminating carers. These insects make a particularly good model for such arms races because their geographical ranges overlap in a fractured mosaic. Alcon blues lay their eggs on the rare marsh gentian

plant and it’s there that they first grow before being adopted by a foraging ant. Both gentians and butterflies are rare but the ants are common, meaning that only a small proportion of colonies are ever parasitized. The result is a series of evolutionary hotspots where the two species wage adaptive war against each other in contrast to the many coldspots where colonies never encounter the deceptive butterflies. 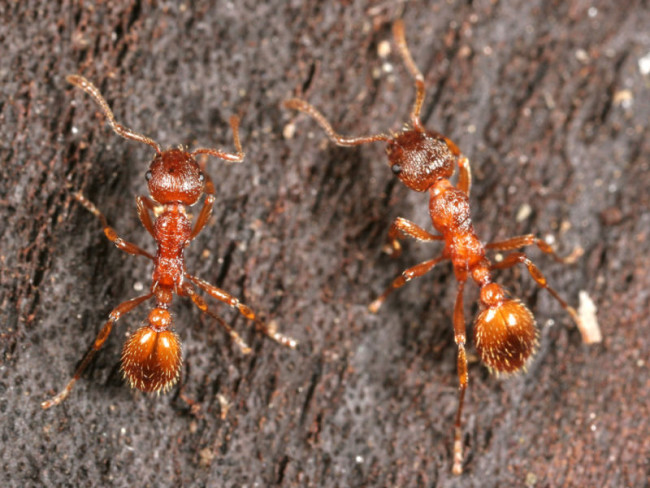 Nash found evidence of evolutionary hotspots when he looked at one of the butterfly’s host species, M.rubra. The chemical coats of populations that were victimised by Alcon blues were significantly different from each other, while those of uninfected colonies were much the same. Those that had encountered the parasitic moochers were adapting by shifting their own smells to distinguish their own from the caterpillars. But when Nash looked at the second host species, M.ruginodis, he found no traces of evolutionary arms races. All the populations smelled very similar regardless of whether they were parasitized or not. The difference lies in the mating patterns of the two ant species. M.rubra queens breed with local males, from colonies in the same gentian patches that are likely to also have a measure of resistance against Alcon blues. M.ruginodis queens disperse more widely and frequently mate with males from distant populations that do not encounter the parasites. Any new mutations for parasite resistance are quickly diluted by the flow of genes from these non-resistant neighbours. Nash thinks that the butterfly uses M.ruginodis as a back-up host, a safe chump to manipulate when M.rubra evolves a strong enough resistance to its lies. To back this up, he found at least one site where M.rubra populations smelled very different but had no contact with Alcon blues. He thinks that these are populations that won their arms race – they once had to contend with the parasite but adapted so well that it abandoned them as hosts. Images courtesy of David Nash Reference: Nash, D.R., Als, T.D., Maile, R., Jones, G.R., Boomsma, J.J. (2008). A Mosaic of Chemical Coevolution in a Large Blue Butterfly. Science, 319(5859), 88-90. DOI: 10.1126/science.1149180