Evolution: Out Of The Sea

Thursday 26th July saw the launch of SciLogs.com, a new English language science blog network. SciLogs.com, the brand-new home for Nature Network bloggers, forms part of the SciLogs international collection of blogs which already exist in German, Spanish and Dutch. To celebrate this addition to the NPG science blogging family, some of the NPG blogs are publishing posts focusing on “Beginnings”.

Participating in this cross-network blogging festival is nature.com’s Soapbox Science blog, Scitable’s Student Voices blog and bloggers from SciLogs.com, SciLogs.de, Scitable and Scientific American’s Blog Network. Join us as we explore the diverse interpretations of beginnings – from scientific examples such as stem cells to first time experiences such as publishing your first paper. You can also follow and contribute to the conversations on social media by using the #BeginScights hashtag. – Bora

In the beginning, the earth was without form, and void; and darkness was upon the face of the deep, as a giant cloud of gas and dust collapsed to form our solar system. The planets were forged as the nebula spun, jolted into motion by a nearby supernova, and in the center, the most rapid compression of particles ignited to become our sun. Around 4.5 billion years ago, a molten earth began to cool. Violent collisions with comets and asteroids brought the fluid of life - water - and the clouds and oceans began to take shape. It wasn't until a billion years later that the first life was brought forth, filling the atmosphere with oxygen. Over the next few billion years, single-celled organisms fused and became multicellular; body plans diversified and radiated, exploding into an array of invertebrates. Yet all this abundance and life was restricted to the seas, and a vast and bountiful land sat unused. Around 530 million years ago, there is evidence that centipede-like animals began to explore the world above water. Somewhere around 430 million years ago, plants and colonized the bare earth, creating a land rich in food and resources, while fish evolved from ancestral vertebrates in the sea. It was another 30 million years before those prehistoric fish crawled out of the water and began the evolutionary lineage we sit atop today. To understand life as we know it, we have to look back at where we came from, and understand how our ancestors braved a brand new world above the waves. It was a small step for fish, but a giant leap for animalkind. Though, looking at modern fish species, it's not so hard to envision the slow adaptation to life out of the sea. Just the other day, I was feeding my pet scorpionfish Stumpy, and he surprised me with this slow, deliberate crawl towards his food:

A number of fish exhibit traits which are not unlike those of the first tetrapods: the four-limbed vertebrates that first braved life on land, direct descendants of ancient fish. Many of Stumpy's relatives, including the gurnards, are known for their "walking" behaviors. Similarly, mudskippers have adapted anatomically and behaviorally to survive on land. Not only can they use their fins to skip from place to place, they can breathe through their skin like amphibians do, allowing them to survive when they leave their shallow pools. Walking catfishes have modified their respiratory system so much that they can survive days out of water. But all of these are only glimpses at how the first tetrapods began, as none of these animals has fully adapted to life on land. To understand how tetrapods achieved such a feat, we must first understand the barriers that lay between their life under the sea and the land above that awaited them. 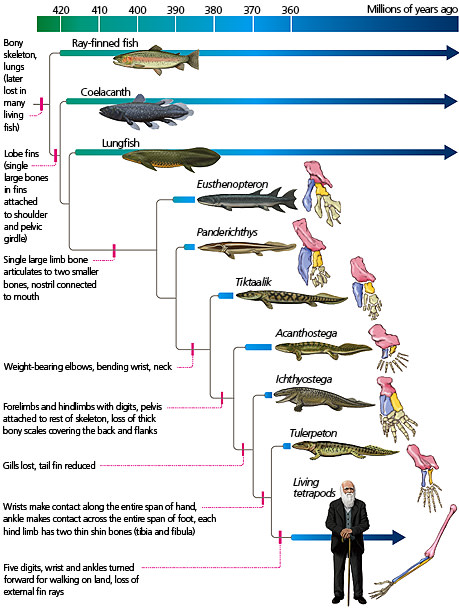 Living in air instead of water is fraught with difficulties. Locomotion is one problem, though as evolution in a number of lineages has shown, not as big a problem as you might think. Still, while mudskippers and catfish seem to walk with ease, the same cannot be said of our ancestors. Some of the earliest tetrapods, like Ichthyostega were quite cumbersome on land

, and likely spent most of their time in the comfort of water. These first tetrapods came from an ancient lineages of fishes called the Sarcopterygii or Lobe-Finned Fish, of which only a few survive today. As the name implies, these animals have meaty, paddle-like fins instead of the flimsy rays of most modern day fish species. These lobe fins, covered with flesh, were ripe for adapting into limbs. But these early tetrapods had to develop more than a new way to walk - their entire skeletons had to change to support more weight, as water supports mass in a way that air simply doesn't. Each vertebrae had to become stronger for support. Ribs and vertebrae changed shape and evolved for extra support and to better distribute weight. Skulls disconnected, and necks evolved to allow better mobility of the head and to absorb the shock of walking. Bones were lost and shifted, streamlining the limbs and creating the five-digit pattern that is still reflected in our own hands and feet. Joints articulated for movement, and rotated forward to allow four-legged crawling. Overall, it took a long 30 million years or so to develop a body plan fit for walking on land. At the same time, these cumbersome wanna-be land dwellers faced another obstacle: the air itself. With gills adept at drawing oxygen from water, early tetrapods were ill-equipped to breathing air. While many think that early tetrapods transformed their gills into lungs, this actually isn't true - instead, it was the fish's digestive system that adapted to form lungs. The first tetrapods to leave the water breathed by swallowing air and absorbing oxygen in their gut. Over time, a special pocket formed, allowing for better gas exchange. In many fish, a similar structure - called a swim bladder - exists which allows them to adjust buoyancy in the water, and thus many have hypothesized that tetrapod lungs are co-opted swim bladders. In fact, exactly when tetrapods developed lungs is unclear. While the only surviving relatives to early tetrapods - the lungfishes - also possess lungs (if their name didn't give that away), many fossil tetrapods don't seem to have them, suggesting that lungfish independently evolved their ability to breathe air. What we do know is that it wasn't until around 360 million years ago that tetrapods truly breathed like their modern descendants.

The other trouble with air is that it tends to make things dry. You may have heard the statistic that our bodies are 98% water, but, as well-evolved land organisms, we have highly evolved structures which ensure that all that water doesn't simply evaporate. The early tetrapods needed to develop these on their own. At first, like the amphibians that would arise from them, many tetrapods likely stuck to moist habitats to avoid water loss. But eventually, to conquer dry lands and deserts, animals had to find another way to keep themselves from drying out. It's likely that many of the early tetrapods began experimenting with ways to waterproof their skin. Even more important was the issue of dry eggs. Amphibians solve the dryness issue by laying their eggs in water, but the tetrapods which conquered land didn't have that luxury. The solution to land's dry nature was to encase eggs in a number of membrane layers, in what is now known as an amniote egg. Even our own children reflect this, as human babies still grow in an amniotic sac that surrounds the fetus, even though we no longer lay eggs. This crucial adaptation allowed animals to cut ties with watery habitats, and distinguishes the major lineage of tetrapods, including reptiles, birds and mammals, from amphibians. These crucial adaptations to tetrapod skeletons and anatomy allowed them to conquer the world above the waves. Without their evolutionary ingenuity, a diverse set of animals, including all mammals, would not be where they are today. Yet still we barely understand the ecological settings that drove these early animals out of the sea. Did dry land offer an endless bounty of food not to be passed up? Perhaps, but there is evidence that our ancestors braved the dry world very early on, even before most terrestrial plants

or insects, so it's possible earth was barren. Were they escaping competition and predation in the deep? Or was land important for some yet undetermined reason? We may never know. But as we reflect upon our beginnings, we have to give credit to the daring animals that began the diverse evolutionary lineage we are a part of. While we may never understand why they left the water, we are thankful that they did. Other Posts in the Evolution Series:

Photo: A model of Tiktaalik rosea, one of the earliest tetrapod ancestors. Photo courtesy of Tyler Keillor.