Evolution, Back on the Bookshelf 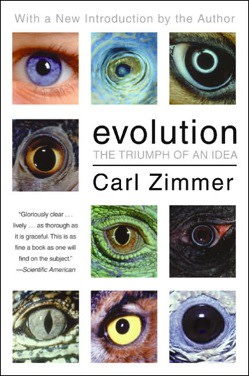 I'm happy to report that the eyes are back. My third book, Evolution: The Triumph of an Idea, came out in 2001. It's a survey of the history and cutting edge of evolutionary biology, from the origin of new species to mass extinctions, from the rise of complex life to the emergence of humans. The book explores evolutionary races between hosts and parasites, between males and females. It puts evolution in a historical context as well, showing how Darwin's theory emerged out of the science of his time and how social and political tensions foster hostility to evolution today. Scientific American called it "as fine a book as one will find on the subject." (More information, as well as an excerpt, can be found here.) HarperCollins has now reissued Evolution, with a new introduction from yours truly. I reflect on the past five years of science and politics. For the politics, I focus on the Dover intelligent design trial last fall, which brought the current controversies over how to teach evolution into sharp relief. For the science, I look at new research in human evolution, from the search for genes that make us human to new discoveries about the oldest known hominids. As these links suggest, the introduction sprang from the fertile ground of this blog. So if you want to get some more writing about evolution on the printed page rather than the computer screen--or if there's someone you know who wants to know what all this stuff about Darwin is about--please check out the book. The official release date for the reissued edition is September 5, but Amazon will let you buy it now.