Everything You Never Wanted to Know About the Mites That Eat, Crawl and Have Sex on Your Face

Read at your own risk. 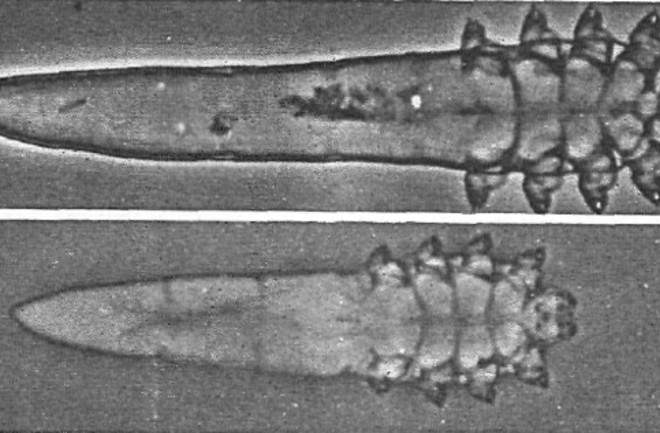 New Scientist published a story yesterday stating that rosacea — a common skin disease characterized by red blotches on one’s face — may be “caused” (more on this later) by “tiny bugs closely related to spiders living in the pores of your face.” Tiny bugs that “crawl about your face in the dark,” lay eggs in your pores, and release a burst of feces when they die.

This is the terrifying world of the Demodex mite. And by “terrifying world,” I mean your face. For anyone who wants to know more, and who isn’t currently clawing at their cheeks or bleaching their head (health tip: don’t), here’s everything you never wanted to know about your face-mites.

Say Hello to my Little Friend

Mites are relatives of ticks, spiders, scorpions and other arachnids. Over 48,000 species have been described. Around 65 of them belong to the genus Demodex, and two of those live on your face. There’s D. folliculorum, the round-bottomed, bigger one (top image, above) and there’s D. brevis, the pointy-bottomed, smaller one (bottom image, above). These two species are evolution’s special gift to you. They live on humans and humans alone. Other Demodex mites have similarly specific preferences: D. canis, for example, is a dog-lover.

Both species are sausage-shaped, with eight stubby legs clustered in their front third. At a third of a millimeter long, D. folliculorum is the bigger of the two. It was discovered independently in 1841 by two scientists, but only properly described a year later by Gustav Simon, a German dermatologist. He was looking at acne spots under a microscope when he noticed a “worm-like object” with a head and legs. Possibly an animal? He extracted it, pressed it between two slides, and saw that it moved. Definitely an animal. A year later, Richard Owen gave the mite its name, from the Greek words ‘demo’, meaning lard, and ‘dex’, meaning boring worm. The worm that bores into fat. I can only assume that Simon and Owen spent the rest of their lives feeling a little itchy.

These mites are our most common ectoparasites (those that stay on the surface of our bodies, rather than burrowing inside). They’ve been found in every ethnic group where people have cared to look, from white Europeans to Australian aborigines to Devon Island Eskimos. In 1976, legendary mite specialist William Nutting wrote:

“One can conclude that wherever mankind is found, hair follicle mites will be found and that the transfer mechanism is 100% effective! (One of my students noted it was undoubtedly the first invertebrate metazoan to visit the moon!)”

But it’s hard to say exactly how common they are. The first estimate came from a 1903 study, which found the critters in 49 out of 100 French cadavers. The next count, from 1908, found them in 97 out of 100 German cadavers. The nationalities are probably a red herring. What’s clearer is that age matters. The mites aren’t inherited at birth, so each generation picks them up anew, probably from direct contact with our parents. Thanks, parents! If you’re under 20, good news! A French study from 1972 says that you’ve only got a 4 percent chance of carrying Demodex. If you’re old, bad news! You’ve almost certainly got Demodex somewhere.

The mites spend most of their time buried head-down in our hair follicles — the stocking-shaped organs that enclose and produce our hairs. They’re most commonly found in our eyelids, nose, cheeks, forehead and chin. That’s not to say they’re restricted to the face: Demodex has been found in the hairs of the ear canal, nipple, groin, chest, forearm, penis and butt too. Generally, dry skin is a turn-off for them. They prize bodily real estate that’s flooded with oils (sebum). This explains why they love your face. It might also explain why their numbers are apparently higher in the summer, when hot temperatures ramp up sebum production.

How do Demodex mites spend their time? They eat! Some say they eat sebum, but Nutting thought that such a diet wouldn’t be nutritious enough. Instead, he said that they feast on the cells that line the follicle, sucking out their innards with a retractable needle in the middle of a round mouth. On either side of the mouth, D. folliculorum has a seven-clawed organ (a “palpus”) for securing itself to what it’s eating. “All of the structures formed a sharp, offensive weapon,” writes Xu Jing, who first looked at them under an electron microscope. (D. brevis, with its five-clawed palpus, was branded as “less offensive”.)

They crawl! They move about in darkness and freeze in bright lights. The fact that mites have been found on the surface of the skin suggests that they emerge from follicles at night for shadowy strolls across our faces. With their stumpy legs, they’re hardly fast. It would take almost half a day for Demodex to cover the distance from your ear to your nose.*

They don’t poo! The mite has no anus, and stores its waste in large cells within its gut. Nutting saw these as adaptations for a life spent head-down in a tightly closed space. When the mite dies, its body disintegrates and the waste is released. More on this later.

And they have sex! On your face! Their favorite hook-up spots are the rims of your hair follicles. Males outnumber females by three to five times, but this detail aside, Demodex sex lacks much of the horror found throughout the arachnid clan. No traumatic insemination. No cannibalism. The penis and vulva are hidden within the pairs of legs. (Jing wrote that D. folliculorum’s penis “looks like a small candle when it was elongated”. He failed to see D. brevis’s.)

After sex, the female buries into the follicle (if it’s D. folliculorum), or into a nearby sebaceous gland (if it’s D. brevis). Half a day later, she lays her eggs. Two and a half days later, they hatch. The young mites take six days to reach adulthood, and they live for around five more. Their entire lives play out over the course of two weeks.

People with Rosacea Should Look Away Now

Are they parasites, or something more benign? For the most part, it seems that they eat, crawl and mate on your face without harmful effects. They could help us by eating bacteria or other microbes in the follicles, although there’s little evidence for this. Their eggs, clawed legs, spiny mouthparts and salivary enzymes could all provoke an immune response, but this generally doesn’t seem to happen.

But like many of our body’s microscopic residents, Demodex appears to be an opportunist, whose populations bloom to detrimental numbers when our defenses are down. Several studies, for example, have found that they’re more common in people with HIV, children with leukemia or patients on immunosuppressive drugs. Perhaps changes to the environment of the skin also allow the mites to proliferate beyond their usual levels.

In dogs, an overabundance of D. canis can trigger a potentially lethal condition called demodectic mange, or demodicosis. In humans, these blooms have been linked to skin diseases like acne, rosacea and blepharitis (eyelid inflammation). The New Scientist piece will undoubtedly bring this to many people’s attention, but scientists have been talking about such connections for decades. The rosacea link was first put forward in 1925!

Dermatologists have since repeatedly found that Demodex is more common in the cheeks of people with rosacea. In one study, those with the condition had an average of 12.8 mites per square centimeter of skin, compared to 0.7 in unaffected people. And according to an analysis of 48 separate studies, people with rosacea are eight times more likely to have a Demodex infestation. Obviously, correlation not causation, blah blah blah, you know the drill.

There’s plenty of anecdotal evidence about mite-killing treatments and clinical improvements (here’s the latest involving tea-tree oil), but very little in the way of hard clinical trial evidence. An example: metronidazole is sometimes used to treat Demodex infestations, and there’s evidence from three clinical trials that it’s effective at treating rosacea (a Cochrane review, and everything!). Then again, Demodex can survive high concentrations of metronidazole, so maybe the mites are irrelevant to the substance’s actions.

In the new review, covered by New Scientist, Kevin Kavanagh suggests that rosacea may be caused not by the mites themselves, but by the bacteria in their feces. After all, antibiotics that kill the bacteria, but are harmless to the mites, can sometimes successfully treat rosacea. But again: more correlations. The bacterial angle is fascinating, though. We know so little about these creatures that colonize our bodies, and now we must contend with our even greater ignorance of the creatures that colonize their bodies. Down the rabbit-hole we go!

And finally, if all of this sounds unbearably revolting, spare a thought for people with acarophobia — the fear of mites and other “small bugs that cause itching.” What words of solace can we offer to them? Here’s Nutting:

“Those patients with acarophobia (approximately 12 have been seen in our laboratory) seem curable if they follow a prescription which includes a relaxing vacation at the beach. If they insist on a follow-up examination for hair follicle mites, the situation is a bit delicate because most will still be positive. Diplomacy will prevail — only two of our 12 have failed to respond!”

* One review I read quoted their speed at 16 centimeters per hour. Another said 16 millimeters. Given the stubby legs, the centimeter value surely cannot be right, so I’m going with millimeters.