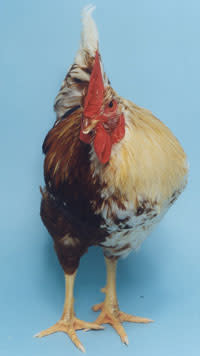 The animal on the right is no ordinary chicken. Its right half looks like a hen but its left half (with a larger wattle, bigger breast, whiter colour and leg spur) is that of a cockerel. The bird is a 'gynandromorph', a rare sexual chimera. Thanks to three of these oddities, Debiao Zhao and Derek McBride from the University of Edinburgh have discovered a truly amazing secret about these most familiar of birds - every single cell in a chicken's body is either male or female. Each one has its own sexual identity. It seems that becoming male or female is a very different process for birds than it is for mammals.

In mammals, it's a question of testicles, ovaries and the hormones they produce. Embryos live in sexual limbo until the sex organs (gonads) start to develop. This all depends on a sexual dictator called SRY, a gene found on the Y chromosome. If it's present, the indifferent gonads go down a male route; if not, they take a female one. The sex organs then secrete a flush of hormones that trigger changes in the rest of the body. The sex chromosomes are only relevant in the cells of the gonads.

But the gynandomorphs show that something very different happens in birds. Birds have Z and W chromosomes; males are ZZ and females are ZW. Zhao and McBride used glow-in-the-dark molecules that stick to the two chromosomes to show that the gynandromorphs do indeed have a mix of ZZ and ZW cells. However, they aren't split neatly down the middle. Their entire bodies are suffused with a mix of both types, although the male half has more ZZ cells and the female half has more ZW ones.

Even though the three chickens were both male and female, one of them only had a testicle on one side, the second only had an ovary on one side, and the third had a strange hybrid organ that was part testis and part ovary. These malformed organs pumped the same soup of hormones throughout the birds' bodies but, clearly, each side responded differently.

Zhao and McBride started to suspect that each cell has its very own sexual identity, and that this individuality exists from the chicken's first days of embryonic life. They proved that by transplanting cells from embryonic sex organs from one animal to another. All the transplants produced a glowing green protein so Zhao and McBride could track their whereabouts, and those of their daughters. 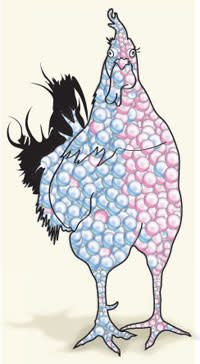 If they were shoved into the midst of other cells of the same sex, they were integrated into the developing sex organs. But if they were placed amid cells of the opposite sex, they became ostracised. In mammals (say, a mouse), an XX cell can become a working part of the testes just as an XY cell can become a working part of the ovaries. But birds cannot be cajoled into switching sides. Male and female cells clearly retain their identity even if they're exiled into new surroundings.

As an exception that proved the rule, Zhao and McBride did manage to create an embryo with hybrid "ovo-testis" sexual organs, by transplanting a lot of female cells into a male embryo. The female cells could respond to signals from their new male home telling them to make sexual tissues. But they responded according to their own internal program, producing female structures and deploying female-specific enzymes.

Zhao and McBride think that right from the first few days of development, a battle of molecules in every cell sets their sexual identities. Depending on whether they're ZZ or ZW, the cells activate a sex-specific cadre of genes. For example, a gene called FAF (female-associated factor; no jokes from British readers please) is strongly activated throughout a female embryo less than a day after fertilisation. Meanwhile, male embryos have 10 times the level of an RNA molecule called mir-2954 than their female peers.

At this early stage, the activity of these genes means that a bird embryo is already male or female, even though no sexual organs have developed. The genes then set the genitals down the appropriate developmental path. These organs pump out hormones that certainly influence the rest of the animal, but unlike in mammals, they don't wield any true power. They are just figureheads; there is no equivalent of the mammalian SRY gene, no sexual dictator giving orders.

A similar process might even operate in some mammals. In the wallaby, a marsupial, the SRY gene is active throughout the entire embryo before the point where the sexual organs form, and some of these organs like the breasts and scrotum develop without the influence of sex hormones. Who knows whether other groups of back-boned animals, like fish or reptiles, do something similar?

The fact that something as seemingly straightforward as being male or female could be so complicated in an animal as familiar as a chicken tells us just how much wonder there is left to uncover in the natural world. 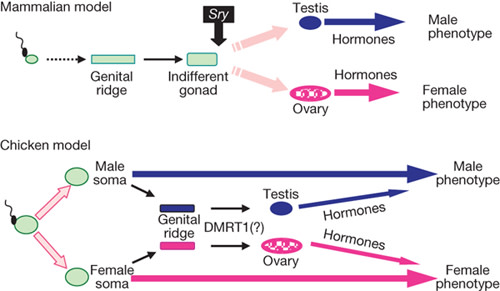 UPDATE: This diagram explains the differences between the chicken and mammal systems. The "genital ridge" is the embryonic tissue that the gonads develop from. Note that in mammals, it is sexually neutral until the SRY gene turns it into ovaries or testes - at that point, hormones set the individual's body (its 'phenotype') as male or female. In chickens, the cells of the body (the 'soma') are already male or female long before this happens. The development of the genital ridge into ovaries or testes (which may or may not be influenced by the DMRT1 gene), and the hormone soup that's produced afterwards, don't really change things that much.