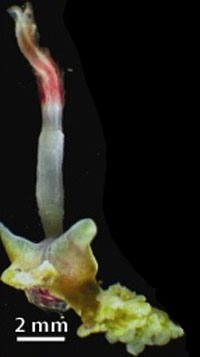 When whales die, their massive bodies slowly sink to the ocean deaths where they provide a feast of riches for bottom-dwelling scavengers. These “whalefalls” are ecosystems unto themselves with thriving communities of living things all eking out an existence on the giant carcasses. These scavengers even include a group of worms called Osedaxor “bone-eaters” that live and feed solely on the bones of fallen animals. They were discovered by humans in 2002, but their relationship with whales is an ancient one. Two new 30-million-year-old fossils suggest that as long as there have been whales, there have been Osedax worms feeding off their bones. Osedax worms have neither stomach nor mouth. They feed by sending a system of “roots” into the bones of its fallen meals. These roots are full of bacterial partners that digest whale fat and collagen proteins, releasing nutrients that the worms can then absorb. At the centre of these roots is the worm itself, which sticks feathery gills out of a hole in the bone. Take out the worm and you’d see a central hole with a connected tangle of thin tunnels. And that’s exactly what Steffen Kiel from Christian-Albrechts University found in a pair of new fossils. Kiel unearthed the specimens in Washington State, USA. They were small, toothed whales, no more than 4 metres in length. Time hasn’t been kind to the remains. Not only did Osedax worms corrode them but sharks clearly had a go at the carcasses too, as evidenced by small teeth that are still lodged there today. But among the fragments that have been reasonably preserved, Kiel found the tell-tale signs of Osedax activity. The bones contain boreholes at their surface, each leading to an excavated inner chamber with a network of finer tubes branching off it that are distinct from the channels carved by the whales’ own blood vessels. 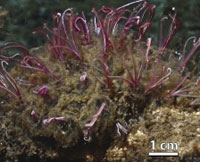 Could other culprits be behind these hollows? Kiel thinks not. Bone diseases can create large cavities in bones but they don’t create circular holes at the surface. Other deep-sea creatures, including various shellfish, sponges, and other worms, can bore into hard substances, but they leave behind holes that are very differently shaped to those of Osedax. And at the very least, no other living animal bores into whale bones. When scientists studied six whale carcasses that had sunk in Monterey Bay, they found no other bone-drilling species apart from Osedax. Kiel dated the fossils to the Oligocene period around 30 million years ago, a time when the whale dynasty truly started to take off, diversifying into new species that would ultimately spread throughout the world’s oceans. It’s tempting to suggest that the evolution of new Osedax species tied into the spread of its food source. Indeed, the corrosive power of these worms means that uncovering good, undamaged whale fossils might be a daunting task for modern palaeontologists, something that Kiel called the “Osedax effect”. However, the group may be even earlier than the whales. Differences between the DNA of Osedax worms suggest that the group first evolved either during the Oligocene, which coincides with the rise of the whales, or the earlier Cretaceous period, when the oceans were dominated by giant reptiles. Perhaps the bone-eaters were feasting on the remains of the long-necked plesiosaurs or the crocodile-like mosasaurs long before the whales provided them with an even more substantial banquet. That’s Kiel’s next challenge: to investigate the bones of ancient marine reptiles to see if any of them bear the traces of hungry Osedax. Reference: PNAS http://dx.doi.org/10.1073/pnas.1002014107 //