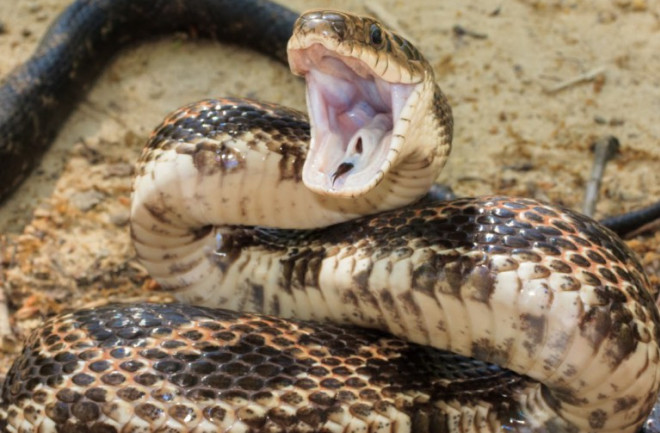 Just because a snake can’t kill you doesn’t mean it’s slow on the draw. New research shows that harmless snakes strike just as quickly as venomous vipers do. The snakes hurl themselves at their targets so quickly, in fact, that a lesser animal would black out from the acceleration.

Vipers have long been the presumed titleholders for strike speed, explains David Penning, a graduate student in biology at the University of Louisiana at Lafayette. These snakes strike to kill, plunging their venom-injecting fangs into a rat or lizard before it can react. But no one has thoroughly tested the assumption that vipers are the fastest, Penning says.

Penning and his coauthors brought 32 snakes into the lab. Eighteen of them were vipers—12 western diamond-backed rattlesnakes and 6 western cottonmouth vipers. The other 14 were Texas ratsnakes. Penning calls these snakes “harmless” because, unlike the other two species, they don’t have any venom. A ratsnake might bite you anyway, but you would only receive some “scrapes” from its teeth, he says. These snakes kill their prey by constriction.

Rather than offering the snakes some sacrificial prey animals, the researchers baited the snakes into striking in self-defense. They used a stuffed glove on a stick. The glove would move around the snake until the animal realized the glove was “clearly not going away,” Penning says, and struck at it. High-speed cameras and mirrors captured these attacks, which happened in the blink of an eye.

Actually, less than the blink of an eye. Both vipers and ratsnakes reached their targets in about 50 to 90 milliseconds, while a human eye-blink takes 202 milliseconds. The researchers found that accelerations in all three species were “impressively high,” and were similar to measurements other researchers had made of snake strikes on actual prey.

Most importantly, the non-venomous snakes were just as fast, or faster than, the vipers.

It makes sense that other snakes would strike just as quickly as vipers do, Penning says. “Prey are not passively waiting to be eaten by snakes.” Venomous and non-venomous snakes both have to catch prey to eat. So it’s likely that plenty of other snake species—not just the ratsnake—are every bit as fast as a viper, Penning says.

How fast is that? The authors note that a startled mammal can get moving in 60 to 395 milliseconds. A snake that strikes in 50 to 90 milliseconds will be able to grab many mammals before they can even flinch. The highest accelerations the researchers saw in the lab were also greater than the jumping accelerations of black-tailed jackrabbits or kangaroo rats. So if one of these animals leapt in the air to escape, a snake could still nab it.

When snakes strike, their heads lurch forward with sickening speed. Human pilots may black out at accelerations less than a quarter of what these snakes can handle, the authors say.

Penning hopes none of this makes snakes seem scarier, but shows how impressive they can be. “Our work is to better describe the amazing performance of snakes,” he says.