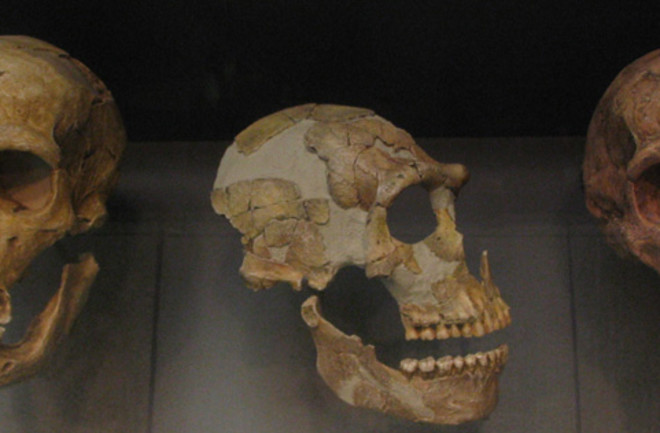 Neanderthal skulls. Image by leted via Flickr Scientists have increasingly realized that DNA is only part of what makes us us — perhaps equally important is how our genes' activity is modified by a process called epigenetics. Recently this cutting-edge field has turned its attention to some very old DNA: Researchers today announced they have reconstructed methylation maps for our extinct relatives. The findings might explain certain differences in appearances between Neanderthals, Denisovans, and us, as well as the prevalence of disease. Epigenetics is a branch of science that explores how the expression of our DNA can be influenced by external factors without the DNA itself changing. Research in the field has focused on DNA methylation. This is when a chemical compound called a methyl group attaches to DNA. This can regulate an individual's genetic expression and even be passed down through generations. DNA methylation has been linked to disease and also to an individual's appearance and behavior. This is the first time, however, that an archaic pattern of methylation has been reconstructed for early humans.

Researchers set out to reconstruct the DNA methylation activity of Neanderthals and Denisovans, two species of archaic human that split from modern humans more than half a million years ago. The researchers could not use methyl measurement techniques that are currently standard procedure in labs because the methods require DNA to be destroyed, an impractical approach when dealing with rare archaic DNA samples. Instead, the team turned to cytosines, one of the four nucleobases that are the building blocks of DNA. Over time, cytosines naturally decay into other nucleobases: unmethylated cytosines become uracils, while methylated cytosines decay to thymines. Because DNA methylation occurs primarily in cytosines, measuring their rate of decay in the archaic DNA allowed researchers to build a detailed picture of how archaic human DNA had methylated — and how it compares with that of modern humans.

The team identified about 2,000 regions in modern and archaic human genomes that had significantly different degrees of methylation. One of those regions, the HoxD cluster, is important in the development of body structure. Researchers theorize that the HoxD cluster, which was highly methylated in archaic humans, may be responsible for some of their differences in physical appearance from modern humans, including shorter, more robust limbs. The researchers published their findings today in Science. Researchers also discovered that highly methylated regions distinct to modern humans were nearly twice as likely to be related to disease, and that more than a third of the disease-related genes were linked to psychiatric or neurological disorders. The team emphasized that additional research was needed, but suggested their findings could indicate that such diseases had only recently emerged in humans.