A researcher turns activist when violence and political chaos in the Central African Republic put the elephants she studies — and her life's work — in peril. 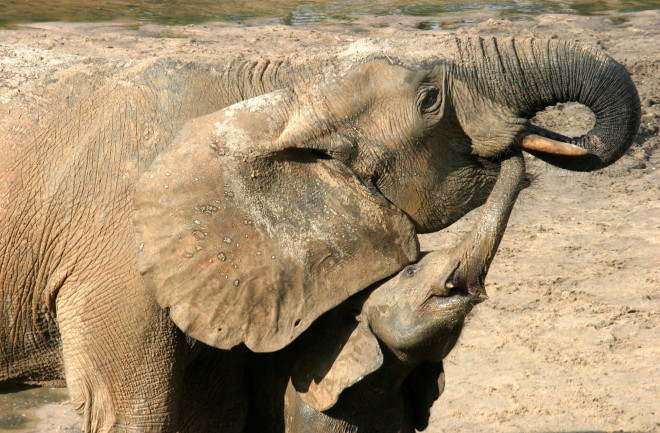 On a muggy Sunday afternoon last March, Andrea Turkalo realized it was time to flee.

A few hours earlier, rebel forces had swept into Bangui, the capital of the Central African Republic (CAR), and overthrown the government of President François Bozizé. Now they were pushing toward the country’s southwestern rainforest, massacring civilians along the way.

At her jungle compound near the village of Bayanga, the elephant researcher grabbed a bag of cash and six hard drives crammed with 20 years of data. Then she joined a dozen other foreigners on three skiffs heading down the Sangha River toward the Republic of Congo, 50 miles to the south.

They reached the border about 10 o’clock that night. As the flotilla approached through the darkness, armed guards at a checkpoint shouted angrily and fired into the air. Turkalo got out and tried to soothe the men, whose belligerence seemed to be fueled by a mix of nerves and alcohol.

“I said, ‘I’m sorry, we didn’t see you, you had no lights,’ ” she recalls. One gendarme, waving a pistol, threatened to search the refugees’ belongings. Turkalo feared he would confiscate their valuables. But after a few tense minutes, his comrades recognized the small, wiry American from previous visits. They greeted her warmly, apologized and let the group pass.

Turkalo, 61, is a field biologist for the New York-based Wildlife Conservation Society and arguably the world’s foremost expert on African forest elephants (Loxodonta cyclotis). Since 1990, she’s been observing the elusive and endangered pachyderms — regarded by many experts as a distinct species from their larger savanna-dwelling cousins (Loxodonta africana) — at a 30-acre clearing called Dzanga Bai.

Her study, by far the longest and most detailed of its kind, has been thrown into limbo by the ongoing upheaval in the CAR. Yet those who have seen her in action insist she will find a way to continue her work.

“It takes an extraordinary person to do what she’s done,” says Vicki Fishlock, a behavioral ecologist with the Amboseli Trust for Elephants in Kenya. Fishlock’s research on forest elephants was inspired largely by Turkalo’s work. “Before Andrea began, we really didn’t know anything about these elephants. Her tenacity, patience and dedication make her an icon."

Turkalo speaks a couple of African languages, but her English retains a touch of New England accent. The daughter of a prison guard from Taunton, Mass., she first came to the CAR in 1980 as a Peace Corps volunteer.

Ten years later, after a stint teaching high school in the South Bronx, she returned to the country with her then-husband, biologist Michael Fay, to run a small conservation project for the World Wildlife Fund in the newly established Dzanga-Ndoki National Park. (He supervised a team of game guards; she oversaw a rural health program.)

A few miles from their base was Dzanga Bai — a rare gathering spot for forest elephants, which spend most of their lives hidden in the jungle thickets of central Africa.

Turkalo and Fay loved to watch as dozens of the massive animals socialized, bathed in creek-fed pools and dug nutritious mineral salts from the soil. Using techniques pioneered by savanna elephant researchers, the couple learned to recognize individuals by characteristics such as tusk shape, gait and ear markings. They found that elephants visited Dzanga Bai for periods ranging from hours to weeks. Hundreds seemed to pass through every year.

Back then, few scientists had caught more than a fleeting glimpse of a forest elephant in the wild; they extrapolated populations by counting dung piles along paths the creatures carved through the underbrush. Only in the ’80s, as increased construction of logging roads made the region’s backcountry more accessible, did outsiders become aware that the animals congregated in scattered clearings known as bais (of which Dzanga Bai was the most densely populated). No researcher had spent much time at such a site.

When the World Wildlife Fund announced a $10,000 grant to fund an elephant study at Dzanga Bai, soon after Turkalo arrived, she won it on the strength of her practical experience, even though her most advanced degree was a master’s in science education. “I’d worked in the bush,” she says with a laugh. “I was used to pit latrines and no running water.”

By 1991, Fay had left to pursue his own projects, eventually becoming a renowned crusader for African wildlife. Turkalo stayed on, continuing her research aided by a staff of local pygmies and financial support from the Wildlife Conservation Society and other groups. A thatch-roofed hut within hiking distance of the Bai became her permanent home. Every afternoon, when the elephants began trooping in from the jungle, Turkalo surveyed them from a 13-foot platform she had built at the clearing’s edge.

In notebooks and on video, she recorded youthful play and adult courtship, squabbles over mineral holes, tussles among bulls for dominance. She monitored which elephants entered the Bai together, which ones greeted the new arrivals with a touch of the trunk, and which helped rear each other’s offspring. She watched young males grow up and leave their families, young females enter their first estrus (the period of sexual receptivity) and elders in their 50s wander off to die.

One sultry evening, Turkalo was trekking home when a huge bull charged her. As she scrambled to safety, she remembered that this animal lost its mother as a juvenile, most likely to a poacher. It was something only Turkalo could know, thanks to her tireless observation.

Over the years, Turkalo identified more than 4,000 forest elephants, charting their family structures, social relations, physical growth and reproductive cycles. She also eavesdropped on the animals’ complex vocalizations: their infrasonic rumbles of friendliness and lust, their squeals of pleasure and distress, their surprisingly varied trumpets of warning.

In 1999, as part of Cornell University’s Elephant Listening Project, she began capturing the calls on automatic recorders hung in trees while observing the accompanying behaviors. Every summer since, she has brought her data to Cornell, where the project’s specialists (aided by a few other observers in Gabon and the Republic of Congo) are compiling a forest-elephant lexicon using spectrographic analysis.

Turkalo has published only a handful of scientific papers, but she shares her unpublished findings with colleagues around the world. “Her dataset is one of a kind,” says Colorado State University conservation biologist George Wittemyer, chairman of the scientific board for the Kenya-based Save the Elephants, a nongovernmental organization. “She’s the only person who can give us any insight into what the life of a forest elephant might be like.”

Turkalo’s data have provided researchers with the single largest source of firsthand information about behavioral differences between savanna and forest elephants. Although DNA studies show that the two species branched off genetically 2.5 million years ago, their physical differences are subtle.

L. cyclotis is smaller, with a maximum height of about 8 feet, compared with 13 feet for a male L. africana. Forest elephants have straighter tusks, rounder ears and narrower jaws. (Juvenile male forest elephants also develop tusks earlier, leading to mistaken reports of “pygmy elephants” in the region.) Turkalo confirmed some similarities between the species, such as their preference for forming extended families with up to two dozen members. But her observations have also revealed forest elephants’ unique culture.

While L. africana males may form bachelor herds, for example, Turkalo discovered L. cyclotis bulls are resolutely solitary. Unlike their grass-loving savanna cousins, forest elephants feed heavily on fruit, along with leaves and bark, following seasonal routes to harvest the richest pickings. And for social interaction — as well as vital doses of calcium, potassium and phosphorous — they visit salt licks like Dzanga Bai.

Turkalo yearns to rejoin the forest elephants and resume her life’s work. But no one knows when, or if, that will happen. After her dramatic escape in March, she spent three weeks at a Wildlife Conservation Society camp in Congo, visiting with colleagues and keeping tabs on the turmoil in the CAR.

In April, when the rebels left Bayanga, she returned to her compound, which had been looted in her absence, and got back to work. A few days later, however, word came that the troops — part of a coalition called the Séléka, drawn from disgruntled northern ethnic groups — were returning. She fled again, this time to her childhood home in Massachusetts.

Since then, she’s been trying to draw international attention to the plight of the people as well as the elephants she left behind. Soon after her evacuation, she traveled to Washington to brief State Department officials on the situation. Forest elephants throughout the greater Congo Basin have been decimated in recent years by organized poachers supplying the booming Asian market with illegal ivory; according to a study published this year in the journal PLoS One, their numbers plunged by 62 percent between 2002 and 2011, to about 100,000. (Savanna elephant populations also declined, though less drastically, and now total about 400,000.) And the chaos in the CAR is making previously protected areas far more vulnerable.

In early May, after Turkalo returned to Massachusetts, a gang of unidentified poachers armed with AK-47s killed at least 26 elephants — including several calves — at Dzanga Bai. Guards at the site, who’d been disarmed by the rebels, stood by helplessly. After the poachers hacked off the tusks, villagers scavenged the carcasses for meat. “It was a food fest,” says Turkalo, who learned of the killing via email from local contacts. She fears that the victims included individuals she’s known for years, but the corpses were too disfigured to identify.

Although the new government has pledged to restore order and protect the nation’s elephants, Turkalo sees little change so far. “There’s still violence and rape and looting,” she says. “I got an email from someone in Bayanga, and he said people are living under an ‘atmosphere of psychosis.’” For now, she’s operating out of a borrowed office at Cornell, writing papers on forest-elephant demographics and their visiting patterns to the Bai.

A portrait in patience, Turkalo refuses to consider the possibility that her life — and her research — among the animals is over. “I’m not going back until I feel the situation is much more secure than it is now,” she says. “But I will go back.”

[This article originally appeared in print as "Caught in the Crossfire."]